It seems like an anthem for London. Beyond him, I notice that the sign above the launderette is missing its "d" so it reads "LAUN ERETTE" like the name of some forgotten minor film actor. Perhaps she had a role in a film titled "Too Much Pressure" about romance on a runaway steam train.

Behind her and Singhs' grocery shop and the Asante Barbers and the William Hill Betting Shop is a grim postwar housing estate in which the blocks are all named after English poets - Pope and Keats and Marvell for example. Most of the tenants are first or second generation immigrants like the "too much pressure" man. I wonder briefly if any residents have even a little cognisance of the poetry crafted by these long departed men whose names always appear on their humble addresses. I also wonder how Andrew Marvell - from East Yorkshire - might have felt to see his name on such a sad residential block in the heart of South London. What an accolade! 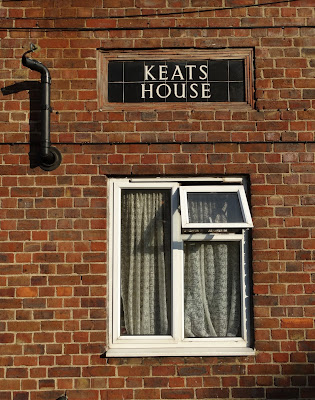 There are always sirens. Mostly ambulances heading for Kings College Hospital at Denmark Hill. I watch as two ambulance women unload an elderly patient. She is on a stretcher, old and frail. Her hair is white and unkempt. A bony arm - the colour of wallpaper paste - extends from the blanket. She sees me through the railing, our lives colliding for a fragment of time and we make thin smiles. She is not long for this world.

Ahead, another "too much pressure" man from another continent is arguing the toss outside A&E with three security guards and two police officers who are trying desperately not to arrest the incandescent fellow. He won't depart easily and I really cannot understand his beef but he has probably kicked off inside the hospital and has just been escorted out. Why can't he just go away? He could be mentally impaired.

There's an information sign by Camberwell Green. It tells readers that the green was in existence as early as 1245 AD when Camberwell was an agricultural village to the south of London which would then have had a meagre population of some 25,000 souls. So the green has endured for a thousand years as London has grown monstrously, devouring the small communities that once surrounded it.. I see someone sleeping on a bench there. Hood up. Can of cider on the pavement below. It was eleven o'clock in the morning.
By our daughter's flat which is in a block not dissimilar to Marvell House or Keats House, I notice two Polish men taking photos with their camera phones. What have they seen? At the corner, close to the recycling bins,  is a healthy looking London rat. Not one of those that spouts verbiage in The Houses of Parliament or writes rubbish for "The Daily Mail" but a furry brown rat with a pink tail. He is preening himself quite brazenly and he is the size of a wild rabbit. Almost fearlessly, he takes his time to amble away in search of yet more delicious human detritus.

We exited The London Jungle via London Bridge, The Bank of England and The Angel, Islington. Riding high above the city in our "uprade" hire vehicle, I was white van man for the weekend. The sign at the start of the motorway said "M1 - The North", like the star that guided those kings to Bethlehem.

When I have fears that I may cease to be

When I have fears that I may cease to be
Before my pen has gleaned my teeming brain,
Before high-pilèd books, in charactery,
Hold like rich garners the full ripened grain;
When I behold, upon the night’s starred face,
Huge cloudy symbols of a high romance,
And think that I may never live to trace
Their shadows with the magic hand of chance;
And when I feel, fair creature of an hour,
That I shall never look upon thee more,
Never have relish in the faery power
Of unreflecting love—then on the shore
Of the wide world I stand alone, and think
Till love and fame to nothingness do sink.