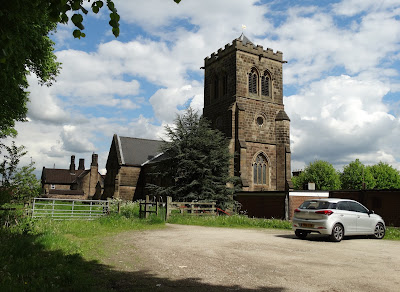 There's "sleek silver" Clint parked near to Christ Church in Ironville, Derbyshire. I drove there on Monday to undertake yet another of my circular walks. A few days before I had never even heard of Ironville but I liked the name - it sounded as if it belonged in America's badlands or perhaps in the wilds of Western Australia. As it happens, Ironville was a company village that grew up in the early nineteenth century in connection with local ironworks. The squat church was built in 1852.

Today the ironworks have gone but if you look closely you will still find evidence of the area's industrial history. It's there in the woods and in the overgrown courses of canals and former railway tracks. This was a place for hard work with the majority of workers living within easy walking distance of the fiery works that gave them their hard-earned wage packets. 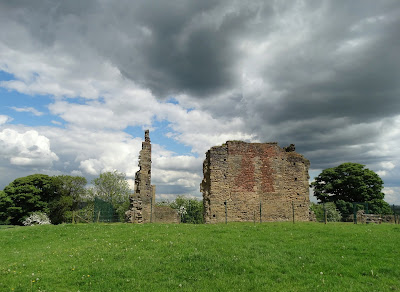 I walked to Jacksdale, Plain Spot and Brinsley before heading west into the Erewash Valley and then onwards to the ruins of Codnor Castle. It was a thirteenth century fortress but when it fell into disuse, builders used it like a quarry or brickyard, taking away cartloads of stone to construct several local houses. The result is that the once impressive edifice is but a shadow of what it once was.

Then on past the William Jessop monument. Jessop was a nationally important industrialist and the main driving force behind The Butterley Company that developed Ironville and its ironworks.

The walk led me past The Erewash Meadows nature reserve where I spotted these greylag geese:- 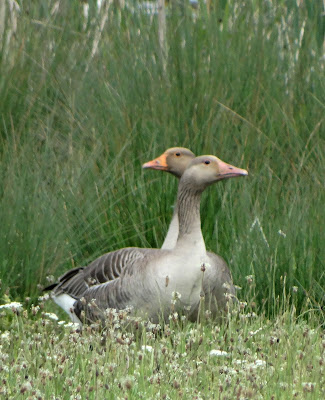 Earlier I rested on a bench in the curiously named settlement of Plain Spot, beneath a signpost that directs travellers to Brinsley, Westwood and Underwood and then I looked up:-
- May 24, 2016