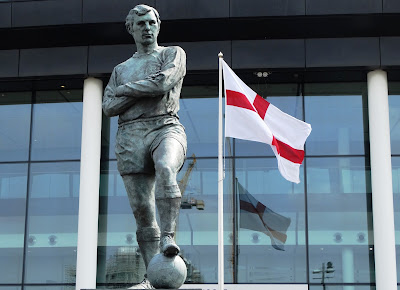 A statue of Bobby Moore stands at the top of Wembley Way. For those of you who do not know, Bobby Moore captained England to their World Cup victory in 1966. On Saturday, he was looking out upon the Yorkshire invasion - two armies - one dressed in amber and black and the other in blue and white.

Below - a father and son wait on the concourse before entering the stadium. As you can see the father is dressed in a rather fetching tiger print "onesie" which is identical to the one that I often wear when rambling in Derbyshire. 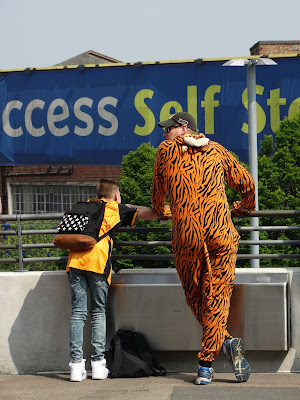 As we waited by the Bobby Moore statue, a TV presenter appeared nearby with her team. She is called Kelly Cates and she is the daughter of Scottish footballing legend Kenny Dalglish. She presents the Channel 5 show "Football League Tonight" which is blogger Steve Reed's favourite show. She's a nice woman but I was with my wife so I had to spurn Kelly's thinly-disguised advances. It's probably my aftershave that does it. 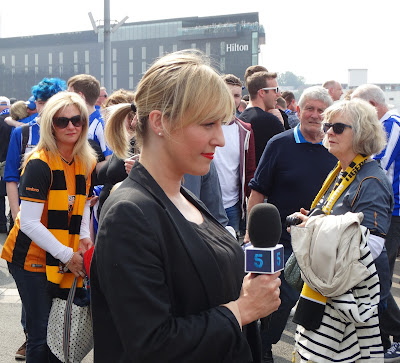 After the game, our team climbed the Wembley steps to receive the Play-Off Final Trophy and cunningly I snapped this picture of one of the stadium's giant screens. There's Big Harry Maguire with the trophy in his hands and to his left there's the manager's son - Alex Bruce. It is a very happy scene. 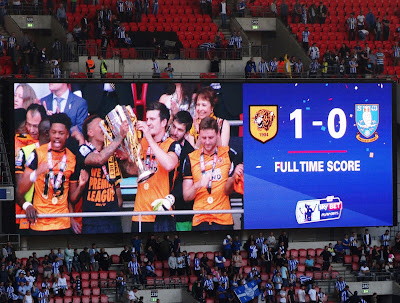 After receiving the trophy, our lads went back down to the pitch where they were snapped by dozens of photographers amidst flames, streamers and glitter. And  as Sheffield Wednesday's 40,000 fans vacated the stadium in disappointment, Hull City's supporters were left singing Elvis Presley's "I Can't Help Falling in Love With You". It is the closest thing we have got to a club song. 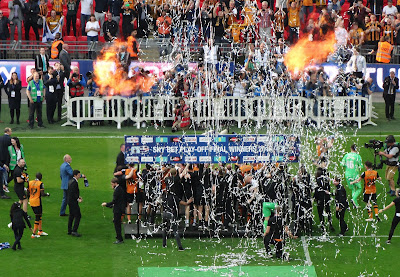 Like a river flows
Surely to the sea
Darling, so it goes
Some things are meant to be
Take my hand,
Take my whole life, too
For I can't help falling in love with you
- May 30, 2016