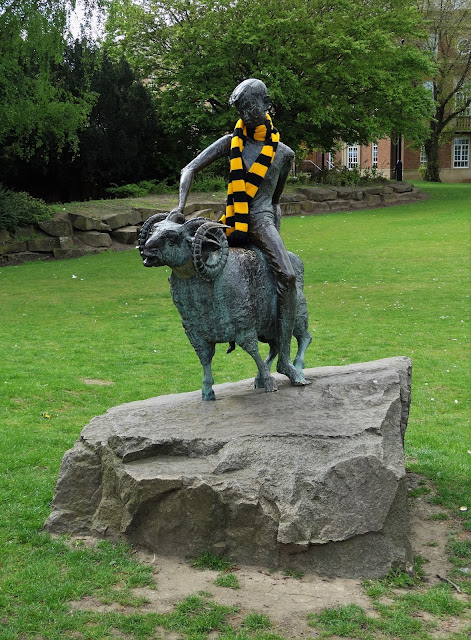 On Saturday, Mrs Pudding and I travelled by train to Derby. There we watched our team - Hull City AFC - take Derby County to the sword in the first leg of the Championship playoff semi-final. Oh what joy when talented fullback Andy Robertson executed the coup de grace in injury time. 3-0 away from home! Surely there is no way back for The Rams and The Tigers will be on their way to Wembley for the final on May 28th when we will no doubt be playing Sheffield Wednesday for a place in The Premier League.
After the match, we walked along The Derwent River Path back into Derby city centre. It was a sunny day and local Derbonians or whatever you call them were sitting in the riverside gardens. We spotted a bronze statue of a boy on a ram and I asked Shirley to put her Hull City scarf round the lad's neck so I could snap  a picture. Unbeknownst to me, a few yards away a member of a social group sitting on the grass started cursing at us. I heard him but thought that the cursing was all internal. It must have infuriated him even more to watch me utterly ignoring him. Damned pipsqueak!
We wandered into Derby Cathedral where I photographed the tomb of Bess of Hardwick - a very influential figure in aristocratic circles during the second half of the sixteenth century. Go here if you would like to know more about her.
Feeling quite peckish we ventured into "The Kitchen" on Sadler Gate. We ordered pots of tea and sandwiches and then as an afterthought asked the waitress to bring us one small side of chips (American: french fries). Underneath the sandwich section of the menu the words "Add a small side of chips for £1" appeared. Though £6 each the sandwiches were delicious but when the bill came I noticed that we were being charged £3 for our small bucket of chips.

Naturally, I challenged this firmly but politely. First with one waitress and then another and then the manager came out but I insisted that I had clearly ordered the small side of chips and not what they laughingly called a "large bucket" and there was no way I would be paying £3. Finally, he caved in. It was the principle and maybe ironically to them, I left £2 as a tip for the first young waitress who had made the original mistake. I was quite proud of myself for staying calm and insistent and not getting over-heated.

The train back to Sheffield takes little more than thirty minutes - swishing along The Amber Valley seeing flashes of places where I have plodded including the intriguing ruins of Wingfield Manor. A Hull City chant lingered in my mind which I shall share with you now. Please sing along to the tune of "The Sloop John B":-
Steve Bruce had a dream
To build a football team
Signed Diame and sent Ben Arfa back home
Dawson at the back
Abel in attack
We are Hull City - in amber and black!
Dudududududu!
- May 17, 2016