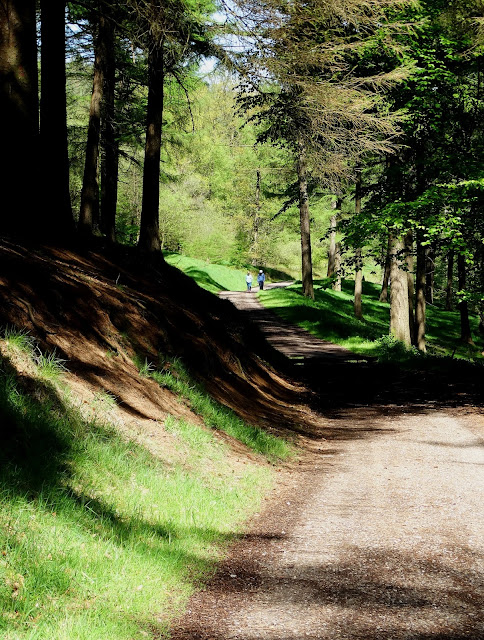 On Tuesday, I took John and Helen out into The Peak District. Up The Derwent Valley and then we walked to the old stone bridge that was reassembled at the head of the valley in 1959. Once it had crossed the river in the village of Derwent before that little settlement was submerged beneath the reservoir waters.

Above you can see the track that leads to Slippery Stones and the old bridge.I just mentioned. Two ramblers are out enjoying the May sunshine. It was a lovely morning.

It is strange to meet up with old friends after such a long time. You realise that a lot of water has passed under the bridge and you consider how your life has evolved in the intervening years. Did we achieve all that we might have done?

John worked in the water industry and then with The Environment Agency. Helen used her economics degree and her innate intelligence effectively in several influential positions - including negotiating better health centres and school buildings. It was easy to see how passionate she had been in her various roles, grasping problems round the throat and taking no prisoners.

What had I done in those working years? I surrendered myself to the world of teaching - a treadmill in which the daily processes are about dumbing down - helping others to advance. It is not a job in which you reach for the sky and blossom. Even the language you use is dumbed down to help children to move to the next step. There's a sense of subjugation.

Perhaps I could have done something else, something more personally fulfilling but I needed to pay the mortgage and raise our own children. Like so many workers, I found myself suppressing pretensions of who I might have been or ideas of what I might have done. I just put my nose to the grindstone and banked my monthly salary cheque. But after all,  I survived and I guess that is a hell of an achievement. Isn't it?
- May 27, 2016