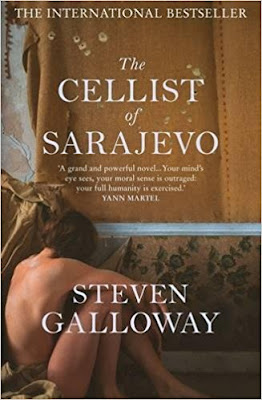 I have just finished reading "The Cellist of Sarajevo" by a Canadian writer called Steven Galloway. It was first published ten years ago and as the title suggests focuses upon the city of Sarajevo which is now the capital of Bosnia and Herzegovina. However, between 1992 and 1996 it was a Yugoslavian city under siege and it is this fearful time that Galloway addresses.

Shells and bullets cascaded upon the city from the surrounding hills. Over ten thousand Sarajevans were killed and everybody lived in a state of uncertainty.

On May 27th 1992 a mortar shell hit a queue of people waiting outside a bakery for bread. More than twenty were killed outright. In their honour a classically trained cellist who lived close by came out into the street every day for a month to play music in memory of his fellow citizens and perhaps to remind those left behind that there was a better way to live.

The novel has three leading characters - Dragan, Kenan and Arrow. They do not know each other but they are all part of the siege and equally affected by it. Their lives, like their city, are forever changed.

Steven Galloway went to great lengths to research this novel so that its context might appear more convincing. I enjoyed "The Cellist of Sarajevo" though I might have liked it better if the three protagonists had somehow been brought together - instead of being separate throughout.

227 pages. The language is easy to access and there are no tedious sidetracks providing historical background, facts and figures. It's not that kind of book. It's about ordinary people and how they live in the teeth of war.

Later: It was sad to discover that Steven Galloway has been involved in much controversy since his sacking from the creative writing department  of  The University of British Columbia in Vancouver. Many of the facts of this case are still secret but it seems he had a two year relationship with one of his students and most of the official concerns surrounded that student's accusations. Galloway's soaring reputation may have been ruined forever.
- September 25, 2018