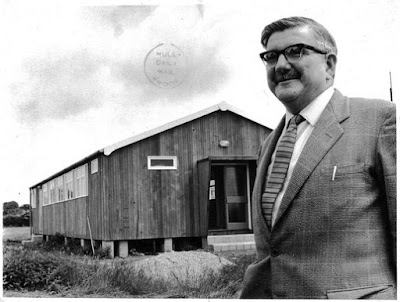 I came across this picture of my father the other day. It must have been taken some time in 1969. The photo appeared in "The Hull Daily Mail" connected with the opening of our village's first purpose-built youth club. Dad was the main driving force behind that project. Working it out, he would have been fifty five years old in that picture. Ten years younger than I am now.

He did so many things for the village. He was also the main driving force behind the establishment of public playingfields. He was a church warden. polling officer at election time and he fought The Church of England to win back a financial legacy that had been intended for the betterment of  village children. He gave so much to his adopted community. In comparison, I feel like a dwarf. I have given so little.

He was the headmaster of the village primary school from 1952 until his retirement in 1978. Sadly, he died from a heart attack just one year later. There was standing room only at his funeral service in the village church. He was greatly respected.

Dad and I had a special bond that grew stronger when I arrived at adulthood and became a teacher. We talked together like friends - not like son and father. He was a gentle, kindly  man and he loved me as much as I loved him. I still miss him - his worldly wisdom and his kind heart. It is a shame that my two children never knew their paternal grandfather.

Nowadays people are snapping photographs of each other all the time but even in the nineteen seventies surprisingly few pictures were taken. The idea of a "selfie" would have been seen as distastefully narcissistic. The picture at the top of this post is the best one I now have for remembering him as he was in his later years.