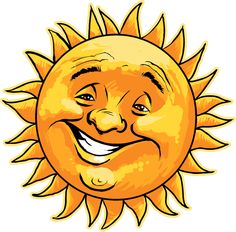 Yesterday it was ordinariness. Today it's sunniness. But I am not talking about the golden orb that floats across the sky each day like a big yellow balloon. No. I am thinking about human nature and the way we memorise our lives.

We talk of glass half full and glass half empty people. The former are blessed with sunny dispositions - optimistic and positive, seeing the world through rose-tinted spectacles. The latter are more circumspect, tending to expect the worst with cloudy, glum or negative dispositions.

Essentially, can we ever change our characters? If the sunniness is there you can't help it just as a morose or pessimistic nature cannot be changed. That's what I think anyway. Besides, it's likely that most of us fall between the two extremes. Sometimes sunny - sometimes overcast - just like the sky.

As some long term visitors to this blog may recall, I began teaching kids at the age of eighteen and finished in my sixtieth year. That's a long association with schoolteaching - some forty two years and of course before that I was the son of a village schoolmaster. I was even born in the school house attached to our village school.

Naturally, I have many memories of teaching. I was hard-working and passionate about my subject - English.  I was creative and effective and  I know I had a positive impact upon the lives of hundreds of young people. There was laughter, many happy exchanges and lessons when you could hear a pin drop. I gave it my all. And yet, and yet... somehow I best remember the bad days - days when there were incidents, days when something went wrong. I would love to sweep them all away and replace them with sunny memories. I really would. But I can't.

For example. At the school where I spent the last twenty three years of my career, there was a fifteen year old boy called Michael. I blogged about him back in 2010. Go here. if you are interested. The memory of that time is seared in my memory like a terrible tattoo. More than thirty years later, the ink has hardly faded.

I could go back further to 1972 when I was teaching on the island of Rotuma. I had to get the school bus to the north of the island every morning. Rotuma High School at Malhaha was three miles away. Sometimes I had a lot of stuff to carry.

One Friday afternoon two pupils who lived in the same village as me agreed to carry two piles of exercise books back home for me. They needed marking over the weekend. I asked them to call in at my house on Monday morning - ready to carry the books back to the school but Fauholi and Jimi didn't turn up. They had not forgotten. They had made a deliberate choice not to pick up the books.

I told Aisea - the headmaster - about this and he dragged the two boys out of their first lesson of the week. After thrashing them, he led them down to the beach adjacent to the school and briefly explained the next phase of their punishment.

There was a big pile of rocks on the beach - each rock weighing several pounds. Fauholi and Jimi had to move that pile to the other end of the beach and this they did in the hot tropical sun and when the job was finished they had to move the rocks back to their original position. It took all day and by the end of it they were exhausted.

After that the boys were fully compliant for the rest of my sojourn upon their beautiful island but it was a grudging compliance and in their eyes I could always see thinly-veiled resentment. I never asked them to do me any more favours and I also fretted about whether or not I could have handled the situation differently. Perhaps I shouldn't have mentioned it to the fearsome Aisea.

Why should I remember all of  that so vividly and not happy times in the classroom or teaching lads to play rugby on the school field or the singing club on Wednesday afternoons when my room was filled to overflowing while other teachers' clubs were underpopulated?

Someone with a sunnier disposition would have relegated Michael and Fauholi and Jimi and all the rest of the bad stuff to oblivion as happy memories rose to the surface in glorious detail. I cannot change who I am. I want to embrace the sunniness but the gloom so often gets in the way.
- September 20, 2018