What a lovely week we have had here in the wilds of  South Yorkshire and North Derbyshire. Beautiful late September sunshine reminded us of our wonderful summer just gone. Perhaps this week has been the last hurrah before wintertime starts to elbow her way in and warm coats we had forgotten about are rediscovered.

I enjoyed two pleasant rambles this week.
Tuesday found me parking up at the hamlet of Spout above The Ewden Valley. My seven mile walk took in More Hall Reservoir - where I found the delightful HP sauce bottle - as well as the hamlet of Brightholmlee, Swinnock Hall and Glen Howe near Wharncliffe Side. 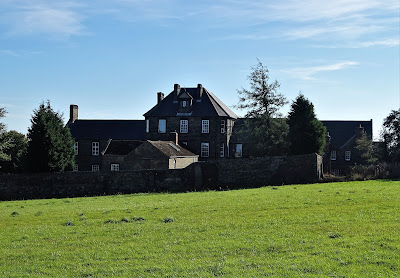 Kirk Edge Convent from the rear and front 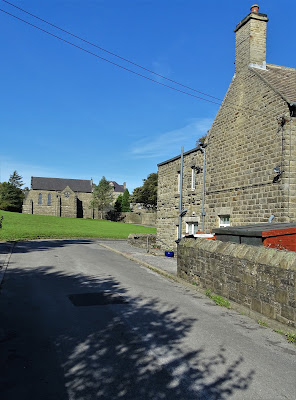 After that I returned to Kirk Edge Convent and walked to the rear of it. Though I could not see any nuns looking wistfully from the windows, I did manage to catch a glimpse of their graveyard. It is in the woods to the west of the main convent site. In my imagination, the convent, nunnery, monastery or whatever you might wish to call it remains a most intriguing place.
Thursday found me riding on the 272 bus to Bradwell - a large Peak District village that owes its existence to historical lead mine and calcite workings. Most of the mining and quarrying  ceased long ago but historical evidence of past activity is easy to find in the landscape above the village.
I guess I walked ten miles in a big loop that brought me back to The Limestone Way - a long distance footpath that begins at Rocester in Staffordshire and ends at Castleton in Derbyshire. It led me down Cave Dale within the shadow of Peveril Castle. Along the way I saw a dead sheep - now a temporary feeding and breeding station for hundreds of bluebottle flies.

She looked like she might just be sleeping but there was a gaping hole in her neck and the flies had also made a gruesome cavern in her rear end. I wondered if she had been shot.

At the bus stop in Castleton I met two Chinese tourists. They were probably in their sixties. The husband seemed to know not a single word of English and the wife's English was as good as my schoolboy French - in other words - very poor. They seemed totally flummoxed by the timetable display so I helped them out and gave reassurance. After four nights in Sheffield  they have four nights in Oxford and then four nights in London. How brave of them to be travelling independently - especially when you consider their awful English.

In the pub last night, Bert and Steve said I looked like a beetroot. Unsurprising as I had walked for five hours in bright sunshine. Fortunately, today I am more pink blancmange than boiled beetroot.
- September 28, 2018