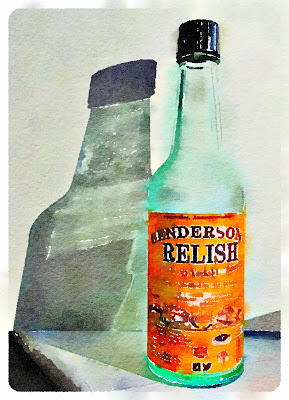 Individual British cities are invariably associated with particular industries, brands or products. My adopted city - Sheffield - is mostly associated with metal products including cutlery and surgical instruments. After all, it was in this city that silver plating began and it was here that stainless steel was invented by Harry Brearley.

Another product that is distinctly Sheffieldish and adored with nostalgic affection by Sheffielders everywhere is Henderson's Relish. It is a black savoury sauce with a secret recipe. As Matt Helders of The Arctic Monkeys pop group said, "It's like Worcester Sauce but a million times better".

It was invented in 1885 by Henry Henderson and for more than a hundred years it was manufactured in a little factory on Leavygreave Road. You will find  iconic orange-labelled bottles of "Hendo's" in the kitchen cupboards of all true Sheffielders,

Henderson's is good to splash in soups and stews or upon slices of cheese on toast. Some Sheffielders even dash it on plates of chips (American: fries) and some use it in place of soy sauce in Asian dishes. Henderson's is very adaptable and unlike that vile Lea and Perrin's Worcester Sauce, Henderson's is vegan! No anchovies added to this secret mixture.

My grown up children live in London but they both make sure that they never run out of Henderson's. The company has its own helpful website with historical notes provided and souvenirs for sale. You may visit that website here. It's hard to believe that I have been blogging for over thirteen years and hadn't got round to devoting a post to Henderson's until today. Silly me!
- December 09, 2018