It is easy to lose track of time during the Christmas period. A common question is - what day is it today? Yesterday was December 29th.

Amongst other things, I drove up to Redmires Reservoirs before hoofing my way up to Stanedge Pole and then onward to Stanage Edge. It was a bright, breezy day with  various other walkers around. I made a point of smiling and saying "Hello" to everybody I passed. This greeting wasn't always reciprocated. Perhaps they thought I was an escaped convict.

When I got back to Clint, I read my current book in peace and after completing another engaging chapter I turned on Radio Humberside just before Jarrod Bowen scored Hull City's opening goal against league leaders - Leeds United. In the end we won by two goals to nil away from home. Bloody marvellous!
In the early evening, I nipped into the city centre to snap some Christmassy pictures and later we took Ian to an Indian restaurant in the suburb of Woodseats. We hadn't been to the "Kasmmiri Aroma" in ages which is strange because the curry fayre was excellent. It felt as if some genuine love had been put into the cooking and the portions were generous. The service was also pleasingly polite and efficient.

So that was yesterday. Today I am feeling rather stressed out ahead of tomorrow's Laughing Horse Blogging Awards - especially as Google HQ have removed some of the anticipated funding. Still, as entertainers will often say - the show must go on! 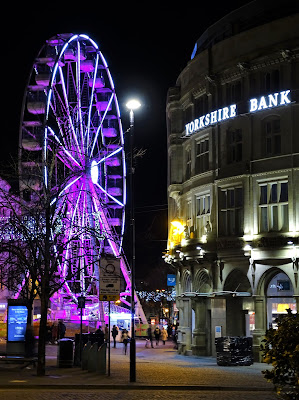 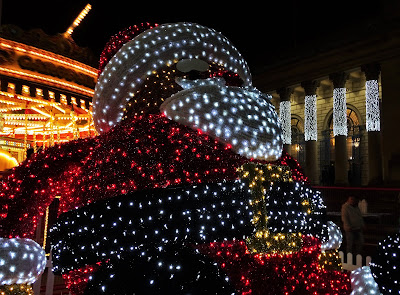