Christmas Eve afternoon saw me walking in the nearby countryside. It was a lovely blue sky day with cloud hanging in the valleys. At this time of year, night-time arrives far too soon upon the island of Britain. It is another reason why I would vote to scrap our bi-annual clock changing rigmarole... if we had a referendum! Mmm... maybe not.

As I have not been feeling in top form, I did not wish to drive Clint too far and I didn't want a marathon walk - just three or four country miles in familiar territory.
Back in November 2015, I blogged about a ruinous chapel on the North Lees estate. It sits in splendid isolation in the shadow of Stanage Edge and is rarely visited. For my own part,  it was hard to believe that over three years had passed since my last visit. See the old blogpost here.


It's funny how light and shadow can fundamentally change the appearance of subjects we choose to photograph. Characteristically, my preferred illumination is bright sunshine beaming from behind me - bringing out colour with sharp definition.

On Christmas Eve as I approached the ruin of Holy Trinity Chapel, sunshine from the south west was bathing it in light quite perfectly:- 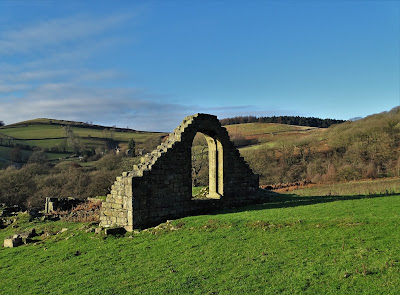 But when I left the ruin, I looked back, noticing different layers of mist under the watchful eye of the telecommunications mast on Sir William Hill. Now the sun was in front of me but I suspect you will agree that the resultant image is much more successful than the first one:- 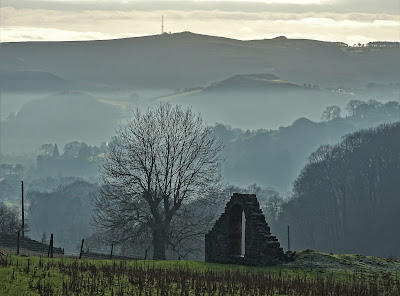 On I wandered, braving the stepping stones across a swollen Hood Brook. Close by, a short distance from the path I discovered the remains of an old mill that does not seem to feature in Ordnance Survey maps. In the now redundant mill pond December reflections were pin sharp.

I carried on via Green House and Outlane - two tiny hamlets that hardly merit names before heading up to Ridgeway Side. From there I gathered another image of the view across The Hope Valley to the same telecommunications mast as before. Hope Valley? I love that name. Let's hope that Britain and the world at large find more hope in the valleys of 2019 for it seems to me that for large parts of 2018 we were lost in Hopeless Valley with unqualified guides:- 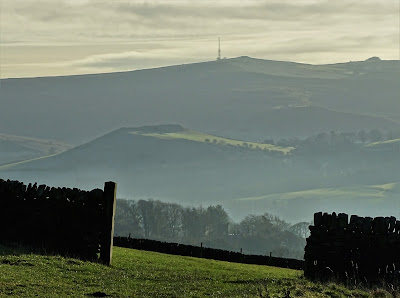