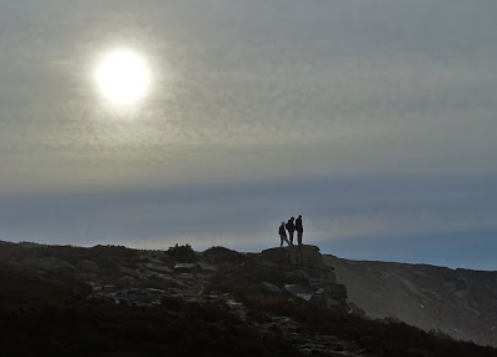 In spite of feeling "under the weather" with a sore throat and raised temperature, I nonetheless undertook a three hour walk this afternoon.

Firstly, it involved a five minute drive out of the city. I deposited Clint upon a rough surfaced car park in the lee of Lady Canning's Plantation. It is very popular with dog walkers. But I don't own a dog, have never owned one and have no intention of ever owning one.

I set off along Houndkirk Road - an ancient track - the construction of which  preceded most of the paved roads that crisscross those moors. After a mile and a half, I left the old track and plodded eastwards along a side path that  heads over to The Burbage Valley. That's when I spotted those three friends in the top picture. They posed for me beneath a milky sun that was veiled in thin cloud. 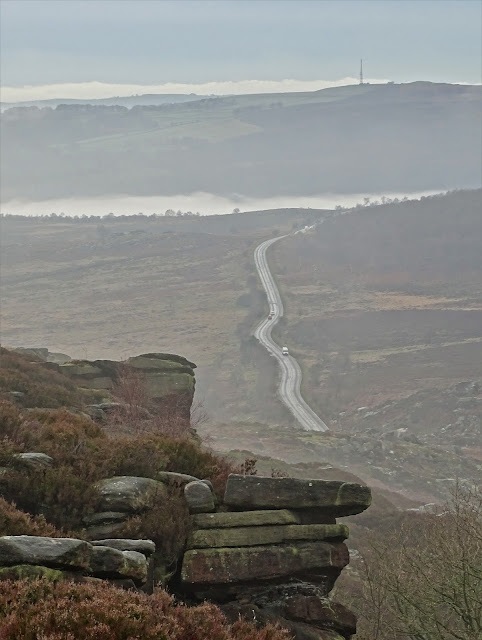 I walked along the same ridge the three friends had just traversed and soon I was able to take the photograph shown above with the Hathersage Road twisting its way into the valley of The River Derwent. Across that valley you can the telecommunications mast on Sir William Hill. 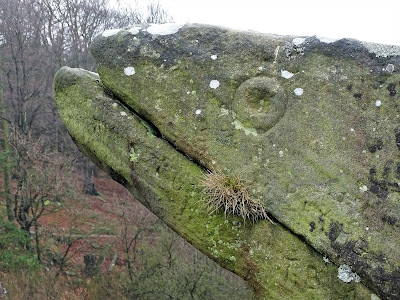 Where the Hathersage road crosses Burbage Brook there's an odd rock formation that is known locally as The Toad's Mouth, I have driven past it a thousand times but because parking at that point is impossible I had never captured a picture of it until today. There it is above. It really does look like a toad doesn't it? I have no idea who carved the eye or when.

I was tempted to pop into "The Fox House" inn for a pot of tea but instead decided to press on, linking up once more with Houndkirk Road in fading light. I spotted an old milepost that would once have guided merchants and carriers. It's very worn now but you can still make out "Tideswell 9/ Buxton 16" - the mileage to  two of the most significant towns in North Derbyshire. 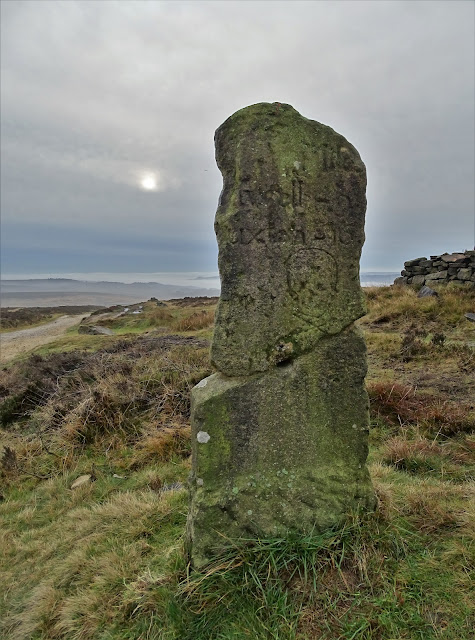 Because I had been feeling slightly poorly, I was relieved to finally see Clint's sleek silver chassis coming into view. He was snuggled up next to a muddy Land Rover and seemed more than disappointed when I interrupted his sly small talk. His engine growled petulantly as we headed back to the city.
- December 04, 2018