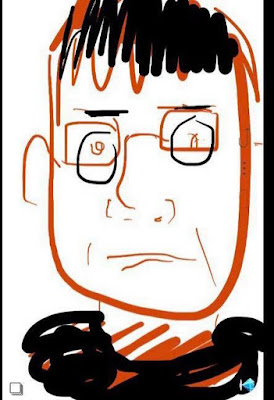 I often visit the website of "The Hull Daily Mail" - mostly to get the latest news on my lifelong football team - Hull City A.F.C.. However, I will also sometimes take note of local news.

It seems that on Boxing Day night a group of young women who share a house in West Hull were traumatised by a flasher.

Later the same fellow "leered" at them through their porch window before running off.

Now I do not wish to make light of flashing. I can understand how being the target of a flasher would be extremely upsetting for anyone but please look at the e-fit at the top of this post. I kid you not - this was the genuine image put out by the police in their appeal for information about the flasher. It has clearly been created on a tablet computer.

Of this image the women say - and I quote -  "it bears an uncanny likeness to the man who exposed himself".

A police spokesman said, "“He’s been described as white, stocky, with dark brown or black, gelled hair. He was wearing a blue ‘Berghaus’ jacket, dark jeans and glasses.”

They neglected to mention that he has the head of a cartoon character drawn by a seven year old. Thankfully, there are no e-fit pictures of the offending penis.
- December 29, 2018