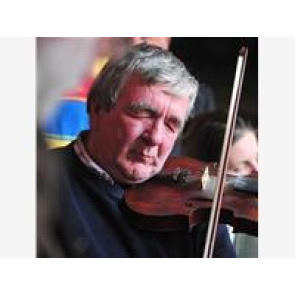 My late brother Paul was a brilliant fiddler. As a teenager, he played classical violin in orchestras but in his twenties, when living and working in north London, he happened upon the Irish pub scene. It was there that he first heard Irish jigs and reels in which of course the fiddle featured prominently.

He went home, took out his violin and practised - learning a different way of playing. It was a style that was filled with raw emotion and clever improvisation and was part of Ireland's great folk tradition. Before very long he was playing in London's Irish pubs and within a few months was asked to join a semi-professional band called Dingle Spike.

One thing led to another. He divorced his first wife and because of his love affair with Irish music went to live in Ireland. There he fell in love with Josephine from Galway. They married and had two sons after buying a remote school residence in the middle of County Clare.

He kept playing his fiddle, joining "sessions" all over the west of Ireland. He became greatly respected in the folk music community. His fingers danced upon the fingerboard and his bow sawed away at the strings in a blur. With eyes closed, he was part of the music, intoxicated by it.

I visited the house in County Clare many times. Paul had amassed a collection of L.P. records that he kept in cardboard boxes. As you can imagine, they reflected his obsession with traditional Irish music. One rainy afternoon, I was thumbing through the albums when I came across a most unexpected record. It stood out like a sore thumb - so different from the rest.

It was "Tapestry" by Carole King. Later I asked Paul about it and he said it was "a masterpiece" and he had loved it from the first time he heard it back in  1971 - before his Irish odyssey began.

I still agree with him. "Tapestry" is indeed an iconic album that evidences a brilliant spell in Carole King's illustrious songwriting career. I have chosen this track to share with you. Like the lover that Carole King addresses in the song, my brother Paul is also now "So Far Away". He died unexpectedly in June 2010 at the tender age of sixty two...
- November 02, 2019