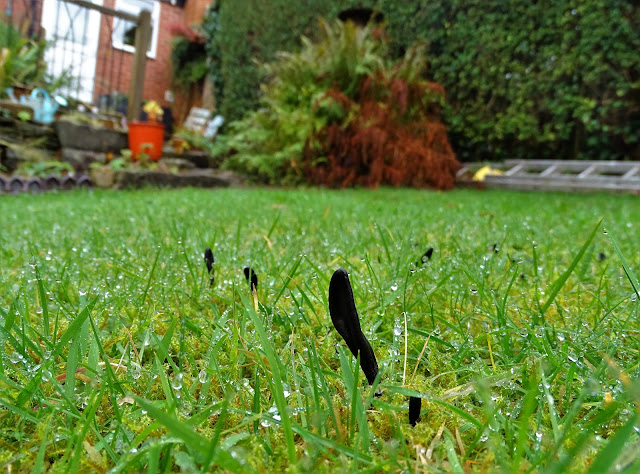 It was in October 2010 that I first noticed this strange fungi growing on our rather mossy lawn. I blogged about it here. Until that autumn I had never been aware of Earthtongue before. If you wish to know more about it you can visit Wikipedia. Go here. 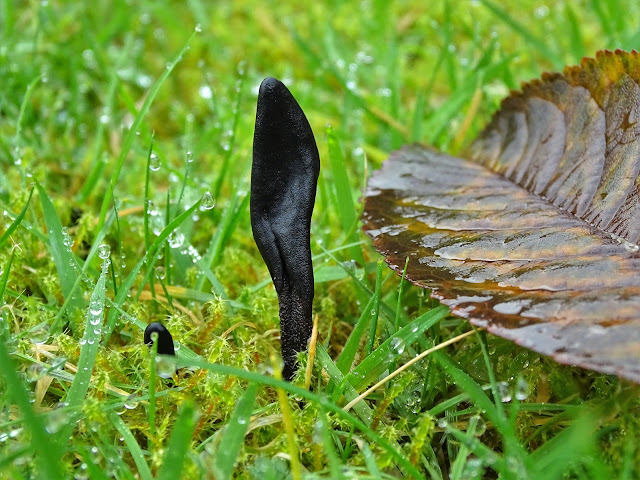 Earthtongues really do look like weird black tongues emerging from the earth. They are well-named. It occurred to me that there might be old folktales linked to this odd fungi - legends or myths but unfortunately nothing surfaced during my research. Consequently, I have made up my own folktale.

"Grandfather, where did the name 'Earthtongue' come from?"

"It was long ago in the time of wolves. On the edge of the great forest that was later to be known as Sherwood, there dwelt a wizened old woman. In the nearby village, she was simply known as The Witch. Her eyes were bloodshot, her fingers as spindly as winter  twigs and just like a polar bear - her tongue was  black.

Her only companions were the birds of the forest and the badgers that lived in the clearing close to her hovel. These creatures were not afraid of her. She sang melodically to them and earned their trust for she was not really a witch after all. She was a widow entering her ninetieth year with tender memories of times long past.

And it was in that summer, because of inclement weather, voracious pests and a very harsh  late frost that crops failed. No oats nor barley. No apples nor plums upon the trees. No hazelnuts in the forest. No root vegetables. No juicy brambles growing on the briars. No turnips to feed the hogs nor seed for the hens.

The people in the village were hungry for they lived from hand to mouth. In their desperation and growing alarm, they sought something or someone to blame. Two children had already starved to death.

Revenge began as a whisper - like a voice upon the wind. Then the whisper became a gabbling - like the geese by the village pond. Then one dark November night as thunder rumbled over those foreboding hills to the west, the gabbling became an angry chorus. It was The Witch! The Witch was to blame! She had cursed them all and cursed their land and now she must pay!

They gathered by the village stocks with pitchforks and burning torches. It was a mob of vengeance and as one they moved over common land to the forest's edge.

Meantime, the old woman lay sleeping on her cot, no doubt dreaming of those times long past. The village folk were almost at the brook when their approaching voices stirred her. They were chanting "Kill The Witch! Kill The Witch!" She was sore afraid.

And then they were there at her doorway. No words were spoken. They pulled the animal skins from her cot and grabbed her thin arms, dragging her roughly outside into the darkness under a stormy sky. There was nothing she could say.

They attacked like wolves and when the killing was done they tossed her aged body in the cesspit behind the hovel and threw dirt and fallen leaves upon her.

Then they went away. Back to the village. The purging was over and The Witch was no more. She would rot in the bowels of The Earth. Forever.

The following spring as a kindly stranger walked through the forest on his way to the distant hills, he passed by the site of the old woman's hovel. It was little more than a charred shell now. Wrens and bluetits darted between the fallen rafters as a dove cooed from the new green canopy above.

Something caught the kindly stranger's eye, amidst the dead leaf litter behind the ruined cottage. It was like a small black tongue emerging from the ground. He had never seen anything like it before. He knelt to observe it more closely and said to himself, "It is like the tongue of the earth and I shall hereafter call it Earthtongue".

And as the kindly stranger stepped out of the forest into the light he thought he heard a woman behind him singing to the birds. A voice so sweet and pure that it filled his eyes with tears." 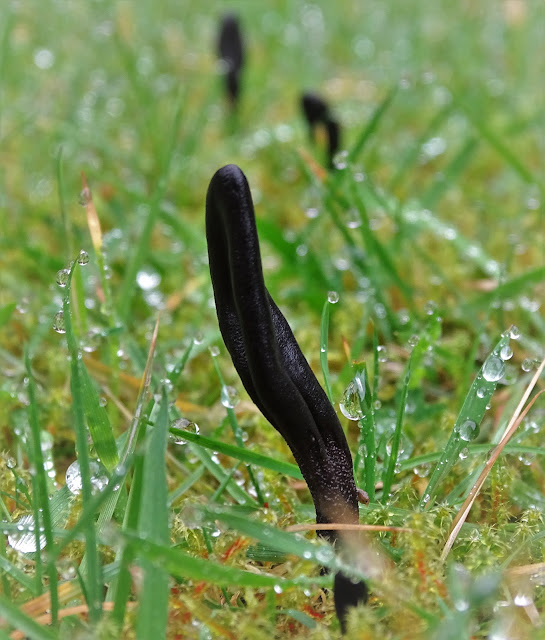