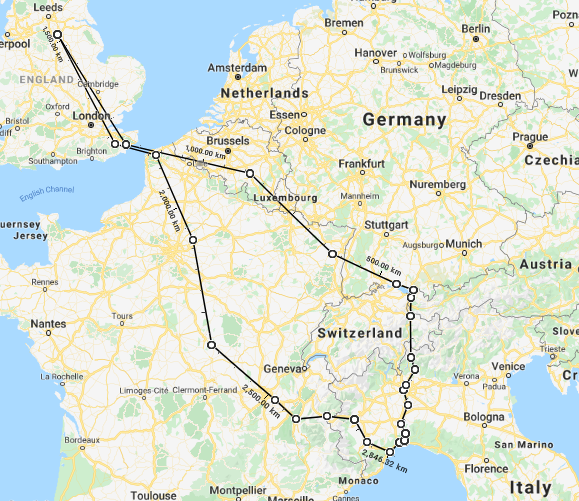 It was the summer of 1997. I had bought a small camping trailer from some friends. Linked to this, I had had a tow bar fitted on our silver Ford Escort.

We planned  a road trip through the heart of Europe down to The Mediterranean without the assistance of the internet which was very much in its infancy. Ian would have been twelve years old and Frances would have been nine and of course Shirley and I were younger too.

In mid-July I had the car fully serviced for we were about to set off on a 3000 mile journey. Some of the camp sites were pre-booked and I had acquired maps and other useful information.The camping trailer was packed - including the big frame tent we had just bought.

We set off very early one morning bound for Folkestone. The Channel Tunnel had finally been opened the year before and this was the first time we had used it. I manoeuvered the Ford with its little trailer on to the flat bed of a train and we were transported for twenty five miles under the English Channel, emerging in France half an hour later.

Then we headed to southern Belgium, arriving in the early evening and successfully setting up camp on a wooded site near Spa where the Belgian F1 Grand Prix race is held each year.

After two Belgian nights we were on the road again heading through Luxembourg and back into France. We camped for three nights near Bitche in the Moselle region. The campsite was right next to an "etang" or an inland lake  I remember swimming in there with the children  though the water was muddied and you wondered where you were putting your feet. There could have been water snakes or alligators or bottom feeding sharks!

After packing up the camping trailer once more, we set off for Strasbourg before heading east into Gemany. It was as we were crossing the border that I noticed the temperature gauge rising on the car's dashboard. I am not referring to the summer weather but to the car's radiator. I pulled over and after a few minutes carefully unscrewed  the radiator cap. Steam was emitted as if from an Icelandic geyser.

A kind German man in a Porsche stopped to see if he could help and though he hardly spoke a word of English, he managed to communicate that there was a problem with the fan and that I should drive south without replacing the radiator cap.

We headed along fast roads towards Lake Constance or Konstanz which straddles Germany's border with Switzerland. As we drove along there was no problem with the water temperature - with cooling air swishing into the engine compartment but when we hit slow traffic in Friedrichshafen the gauge began to rise alarmingly again.

I saw a sign for lakeside camping and headed there immediately. It was a Friday evening and as we set up our tent once again I was very anxious about how we would get the car fixed. We went to the camp's bar-restaurant where a helpful barmaid who spoke reasonable English found me the address of the town's main Ford dealership but it was too late to go there for help that night. I would try in the morning.
To be continued
- November 25, 2019