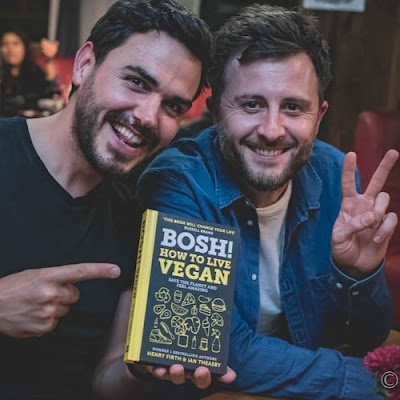 I got round to reading "How To Live Vegan". It was written by the so-called Bosh! Boys - my son Ian and his friend Henry Firth. They wrote it at the behest of their publisher - Harper Collins who realised that there was a place for such a lifestyle manual in a changing world where more and more people are considering moving to plant-based diets - recognising the huge detrimental impact that meat dairy and egg consumption are having upon our planet.

But please don't think that "How To Live Vegan" is preachy, adding to climate crisis tales of gloom and doom. No way. It is an upbeat, friendly and honest guide to adopting a vegan lifestyle in this modern world. It is easy to read and practical too.

It considers such matters as the clothes we wear, cosmetics, eating out, dealing with cynics and sceptics, shopping in supermarkets, travel, meal planning and best practice in the kitchen. The underlying messages are that it is good to be alive, it's good to aspire to live better lives and it's good to adopt a plant-based diet.

From the word go - Ian has always said that the number one reason he turned vegan was through watching the 2014 documentary "Cowspiracy" by Kip Andersen and Keegan Kuhn. This film is referred to in "How To Live Vegan" and so just the other night I finally watched it. It is available in Netflix but here's a YouTube link to the official trailer.

I had imagined that "Cowspiracy" would be about intensive farming methods and mistreatment of farm animals but it wasn't that at all. It was about the massive harm that animal industries are doing to our planet and how the startling connected statistics have so often been  swept conveniently under political carpets in a weird conspiracy of silence.

"How To Live Vegan" contains three hundred pages of positive, straightforward assistance. It tells us that it is okay to approach veganism in the way that best suits you and that no one can be 100% vegan. There will be slip-ups and contradictions along the way. Ian and Henry twice refer to the British Vegan Society's definition of veganism:-

Veganism is a way of living which seeks to exclude, as far as is
possible and practicable, all forms of exploitation of, and cruelty
to, animals for food, clothing or any other purpose.

The emphasis is upon the terms "possible" and "practicable" -  riders sensibly embraced in this handbook.

The third Bosh! recipe book - "Bosh! Healthy Vegan" will be available in Britain from Boxing Day and in the USA on January 28th.
- November 29, 2019