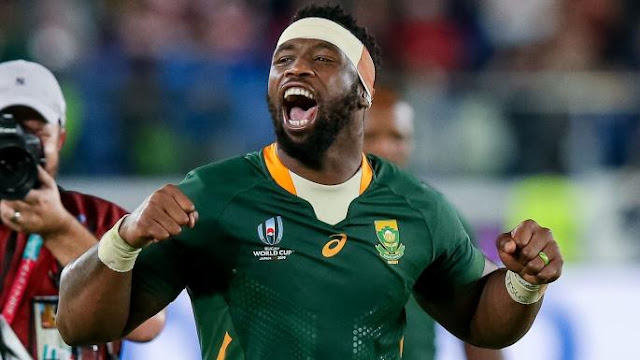 On Saturday morning, English rugby union supporters left their beds with much expectation. We hoped to see our national rugby team beat South Africa in the final of The Rugby World Cup. England had beaten both Australia and New Zealand to reach the final in Yokohama, Japan. Surely, we could overcome South Africa too.

But it wasn't to be. South Africa were stronger and more determined in their forward play and, as the game went on, they ground England down. The final score was England  12 South Africa 32.  We were well-beaten and I believe that  all England rugby supporters will generously admit that on the day, the best team won.

In years gone by, the South African national rugby team was bleached entirely white even though 90% of the population of that country is non-white. But at this year's final their team was multi-racial, led by their very first black captain. That man was Siya Kolisi, pictured at the top of this blogpost. He grew up in poverty in the Eastern Cape region. To see him lead his country to a world cup victory was bigger than sport. His captaincy was a symbol of hope for for all township dwellers, for barefoot children skipping in the street, for hotel cleaners and agricultural workers, for the very prospect of equality.

Kolisi's father, Fezakele Kolisi, attended the final and witnessed his son lifting the golden cup. He had never been on an aeroplane before and had never previously left South Africa. It was quite a moment for him too.

I admit that I felt pretty blue at the end of Saturday's game. My facial muscles turned the corners of my mouth down for the rest of the day but when all is said and done it was just a rugby match. Congratulations to South Africa!
- November 04, 2019