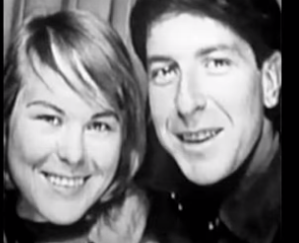 On Friday night, I watched a documentary film called "Words of Love". It was all about the fifty six year long relationship between Leonatd Cohen and Marianne Ihlen. I found it tremendously moving but then I was always a Leonard Cohen fan - ever since I  heard his first album in the autumn of 1967. By the way, that record included a song called "So Long, Marianne".
They first met in their mid-twenties on the island of Hydra in Greece in 1960. Marianne had been living there since 1958 and had a baby son called Axel. She was in a village grocery store when Leonard appeared. She said this:-

I was standing in the shop with my basket waiting to pick up bottled water and milk. And he is standing in the doorway with the sun behind him. And then you don't see the face, you just see the contours. And so I hear his voice, saying: ”Would you like to join us, we’re sitting outside?”

At first, in the unearthly sunlight of Hydra, far from the hustle and bustle of the so-called"real" world, they were a devoted couple. He wrote his novel "Beautiful Losers" on Hydra and Marianne supported him through that process.

His first instinct was to be a successful, published writer but in the mid-sixties he was drawn to songwriting and with the encouragement of American folk artiste Judy Collins he transitioned to the stage.

Gradually, he spent less and less time with Marianne on Hydra and they were often estranged. It wasn't the life that Marianne wanted and at the end of the sixties she moved back to her native Norway where she found an oil engineer to marry while she worked in oil platform administration.

But her special bond with Leonard continued through the decades. They remained in touch and you might say that Marianne was the only woman that he ever truly loved. It certainly seemed that way. She had cast a spell over him, similar to the one that he had cast over her.

In the spring of 2016, Marianne was dying in an Oslo hospital. She asked a friend to send Leonard the news. He was also on the path to  lifelessness but he sent a heartfelt letter that was read out to Marianne on her deathbed:-

Well Marianne it's come to this time when we are really so old and our bodies are falling apart and I think I will follow you very soon. Know that I am so close behind you that if you stretch out your hand, I think you can reach mine. And you know that I've always loved you for your beauty and your wisdom, but I don’t need to say anything more about that because you know all about that. But now, I just want to wish you a very good journey. Goodbye old friend. Endless love, see you down the road.


-  Your Leonard
The circle was almost complete. He was to die just three months later.


The documentary mapped a beautiful love story made all the more poignant because of the elements of tragedy that were part of it. For example, how could a singing poet truly settle down into a life of domesticity? This was not in his blood

But the greatest tragedy of all surrounds Marianne's son - Axel Joachim Jensen. To me he seemed like a victim of instability and he ended up damaged by drugs, living in mental institutions in Norway. He must be sixty years old now. Leonard Cohen was very fond of him and what happened to Axel certainly wasn't his fault.