Camping by Lake Constance in Friedrichshafen, southern Germany in July 1997

In the summer of 97, we left The French Alps and headed north arriving in the Burgundy region of France on August 12th. By then we were very adept at erecting our frame tent and arranging its interior for sleep and temporary living. It was all about teamwork. Surrounded by vineyards, we set up camp on a small, peaceful site just outside the historic city of Beaune.

That night I was feeling quite bad about our son Ian because his thirteenth birthday was the very next day. There would be no party or fun time with friends. Instead he was miles from anywhere in the heart of France with his family.

We had one or two small gifts to give him but when Shirley retired to our sleeping compartment for the night, I resolved to stay up with several pieces of A4 paper and a felt tipped pen. By the light from our gas lamp, I created a special birthday greeting that I affixed to an old washing line just outside the tent doorway.

And this is what our darling boy saw when he arose from his slumbers as a teenager twenty two years ago:- 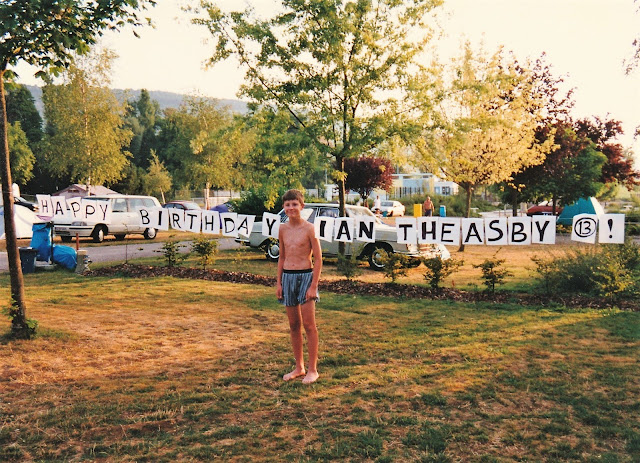 And along with the previous two posts, that my friends is pretty much all I remember about our European road trip in 97. Many details have evaporated completely. For example, I have no memory whatsoever of any of the campsite shower and toilet blocks that I must have visited. And no memory of what we cooked or ate or where we went shopping but bizarrely I can remember a praying mantis on the spindly tree just behind Ian in the picture above. We watched this curious creature for several minutes. Yes he or she has remained with me when so many other memories and images have,  it seems, disappeared for good.
- November 28, 2019