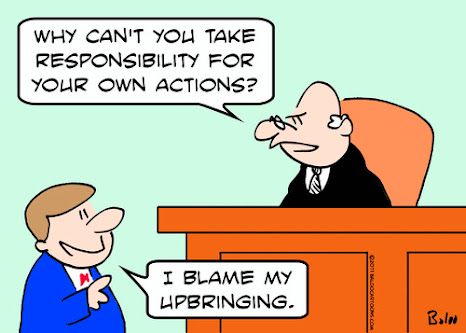 I got caught speeding on the motorway... Why do car manufacturers produce cars that can comfortably  travel at 100 mph?

I slipped over on an icy pavement... Why didn't the local council spread grit there?

I was late for my appointment... I knew it should have been scheduled for a later time.

My instant barbecue caused a small woodland fire... I didn't see any warning signs at the picnic site and besides who left all those dry pine needles lying around?

The doctor told me I have got lung cancer... The British American Tobacco Company knew about the carcinogenic dangers of smoking their products long, long ago.

I was outed for posting comments about black English footballers online... It's not my fault that social media providers don't vet respondents properly - they are just asking for trouble.

I was charged for storming The Capitol Building... President Trump had called for a response so as an American patriot it was like I was obeying his command.

I lost the presidential election.... The vote was rigged.