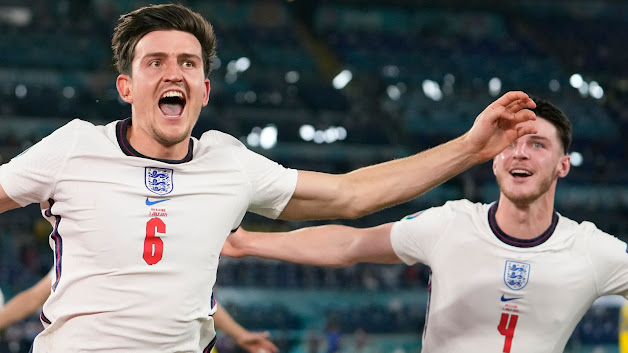 Harry Maguire celebrates his goal in Rome
"Some people think football is a matter of life and death. I don't like that attitude. I can assure them it is much more serious than that." - Bill Shankly (legendary Liverpool F.C. Manager)
Today , Sunday July 4th, every English Sunday newspaper leads with last night's football result: England 4 Ukraine 0.  It was the last match  at the quarter final stage of the Euros - the European nations football championships which are normally held every four years. This game happened at The Olympic Stadium in Rome, Italy.
Ukraine seemed quite pedestrian and did not have an answer for the zippiness of England's attacks. Once again our lads played like a proper  team - working for each other. I was so pleased to see our captain Harry Kane score two but even happier to see ex-Hull City player Harry Maguire score a thunderous header. Same for  Liverpool skipper Jordan Henderson who notched his first ever  goal for his nation. It was a moment he will always remember.
Here in Sheffield, your amiable host had his feet up  on our  reclining La-Z-Boy sofa with a cold bottle of India Pale Ale on the side table. I twitched and jerked, living each kick and tackle as my blood pressure rose and fell. This is how I feel when watching my club team - Hull City and only England can make me feel the same way.
What a brilliant performance and now we will meet Denmark in next Wednesday's semi-final.  One thing is for sure, Denmark will be nervous about playing England. Fingers crossed we will beat them and then go on to meet either Italy or Spain in the final next Sunday. For England fans like me, this is pure dreamland. COME ON ENGLAND!
- July 04, 2021