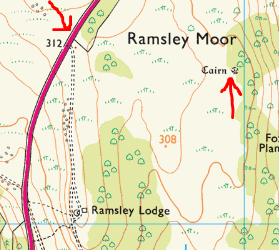 My space mission ended in abject failure. The space in question was the rough land between the A621 and an ancient stone circle or cairn that I had noticed in Ordnance Survey mapping. The first arrow shows where Clint was parked and the second arrow shows my intended destination. The distance was not great - less than one kilometre.

However, the map above does not tell you everything. The terrain was difficult and in full summer growth. Beneath my feet were clods of risen vegetation, grasses up to my waist, occasional rocks and swathes of heather with thorny bushes and solitary undernourished silver birches. In wet weather this land would be nigh on impossible to traverse with swampy hollows and other squelchy unknowns to contend with. People simply do not walk here and I know for sure that the ancient site is little known and rarely visited.

I had researched its exact location as much as possible, studied aerial imagery and had even written down GPS co-ordinates which, by the way,  proved to be incorrect. I even remembered my compass as I set off across that miniature wilderness. Go east young man I said to myself.

But it did not work out.  When I had crossed the space, reaching far less swampy rising ground, I became confused. Of course the summer greenery was hiding things. The walking was still so arduous with each footstep requiring twice the normal effort. I headed south instead of north. That was my big mistake. I was twenty five yards from the site but I could not see it. So close.

And when I had plodded two hundred yards south I just did not have the energy to retrace my steps. By the way, I should add that it was really hot out there - probably 88° to 90°F.

Accepting my failure, I headed down through the wooded scrubland to meet a path that runs parallel to Hewetts Bank. I could not entertain the idea of heading back across the moor the way I had come.

A long but certain detour followed and when I reached the former site of Ramsley Reservoir a woman who was taking gear out of her black Honda said, "You look hot! Where have you been?"

I was tempted to say "Death Valley!"

I don't think it's too much to suggest that my failed space mission was like a metaphor for some of the trials that life throws up. You can see where you want to go and you know how to get there but making it - well, that can be a whole different story. Of course, I will try again another time.