On Friday morning I parked in lovely Whirlowdale Park on the south western edge of Sheffield - before you get to Dore and the nearby moors of the Peak District. I was there to join a foraging expedition led by Dr Patrick Harding - arguably the country's leading authority on mushrooms and toadstools. A genuine mycologist.
There were about twenty people in the group. I had expected we would be wandering through the nearby woodland but really, in the allotted two hours, we just did a short circle of the park, stopping occasionally as the entertaining Dr Harding talked knowledgeably about the various mushrooms we encountered. At the age of sixty eight, his passion for mushrooms remains as excitable as it must have been when he was a boy. It was infectious - as if every mushroom we came across was a precious jewel in Nature's crown.
He spoke about the famous "fly agaric" which he insisted is not poisonous. It is an hallucinogenic mushroom that Scandinavians, especially Lapps, used like alcohol to escape briefly from everyday reality. It gave the effect of flying and may have helped to spawn some parts of our Santa Claus mythology.
At the end of the walk, Dr Harding had books for sale. I bought one called "Mushroom Miscellany" which is an informative personal account of the world of mushrooms, including, legends, stories, myths and rumours. Early on in the book, Dr Harding tells us that there are some 2000 known wild flowering plants in the British Isles but some 14,000 known species of fungi.
At this time of year, mushrooms are nosing through the soil all over the place. Once again we have Earthtongue under our rotary washing line and on recent country walks I came across these fine mushroom specimens:- 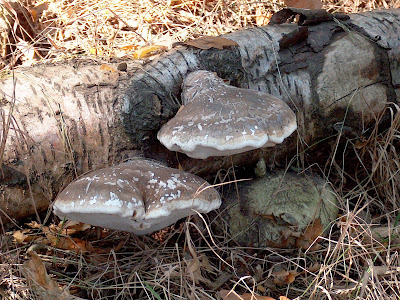 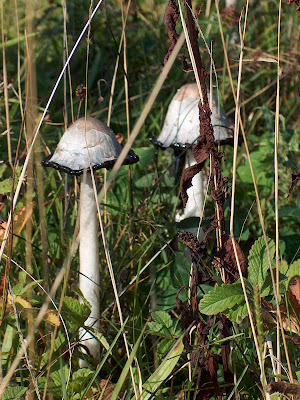 Here's Patrick Harding looking like a hippy Father Christmas in his thirties:- 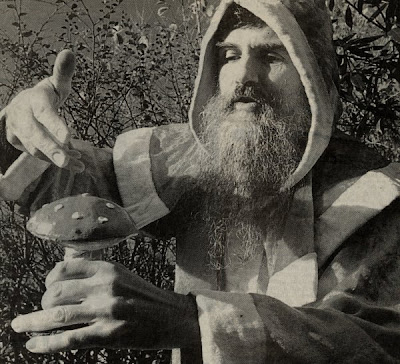 And here he is today - a distinguished scientist - still enthralled by his subject:- 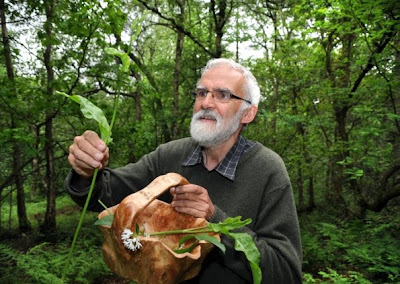 Dr Harding isn't only passionate and knowledgeable about mushrooms - he also knows a great deal about trees and country plants. He is aware of many past uses of plants in cooking and medicine and is clearly cynical about the homogenised, corporate and plastic-packaged world we seem to have inherited. He is amused and appalled by the fact that most people couldn't tell the difference between a beech tree and a larch or a sycamore and an oak. By the way, he stressed that woodland mushrooms are associated with particular trees so that what you find beneath a beech for example will generally be different from what you might find beneath an oak. Fascinating. And if you ever read this Patrick - thank you! A breath of fresh air.
- October 30, 2011