As we all know, the world's population is increasing at an alarming rate. I came across an interesting tool on the BBC website that enables you to discover what position you came in the living human race on the day you were born.
For instance, on the day my father was born in August 1914 he became the 1,794, 229, 969th person on the planet. There were far less than two billion people on Earth at that time. I was born around forty years later but I was the 2,687,150,676th person - way past two and a half billion people then. In 1984 our son Ian came into the world and he became the 4,788,241,610th living person on the planet. You can see that in thirty years, the world's population had grown by a massive two billion.
Find out your position in the human race on the day you were born. I hope the link works - click on the crowd below to, hopefully, go to the BBC's calculator:- 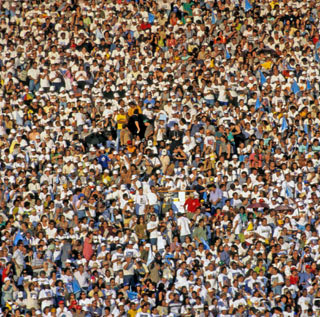 Another thing I have found out is that when my dad was born 42 million people were living in Great Britain. When I was born there were 50 million and when our Ian was born there were 58 million. Now we are well on track for 70 million in the early 2020's. What I'd like to know is what is causing all these extra babies to be born? It's mystifying.
- October 27, 2011