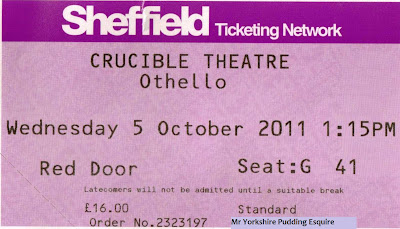 Put out the light, and then put out the light:
If I quench thee, thou flaming minister,
I can again thy former light restore,
Should I repent me:--but once put out thy light,
Thou cunning'st pattern of excelling nature,
I know not where is that Promethean heat
That can thy light relume.
Today it was time for an injection of culture at Sheffield's Crucible Theatre. The current production of Shakespeare's "Othello" has been vaunted on BBC radio and TV and by several theatre critics. I arrived early hoping to buy a "return" ticket and was offered a great seat seven rows from the front.
The production starred Dominic West as Iago, Clarke Peters as Othello and Lily James as Desdemona. For a girl who was still in drama school a year ago, Lily James was superb - imbuing her role with an overlapping sense of purity and gullibility that Shakespeare clearly intended. West was very good but arguably too domineering and I thought Peters made a rather puzzling Othello. His diction was often fuzzy - especially so when he raged. I was pleased to see that the reviewer from "The Guardian" agreed with me saying his enunciation "tips too often into indistinction".
I liked the fact that the set was simple and that the costumery was conservatively Elizabethan. In Shakespeare the words should speak for themselves without self-indulgent and rather bizarre stage effects and costume ideas chosen by madcap directors.
I first read "Othello" at the age of sixteen. I studied it again at university and then as a teacher I taught it a couple of times to A level classes. I am very familiar with the play's ideas and its language. Essentially it's about jealousy and the successful way in which the scheming Iago wreaks cruel revenge upon Othello for missing out on promotion.
The quotation at the top of this post comes from the last act of the play when Othello first extinguishes a lamp before proceeding to suffocate his wife. I have always remembered those lines. If I ever get to the promised land - the old people's residential home - you'll probably find me rocking in my chair reciting those words over and over till the Almighty puts out my light.