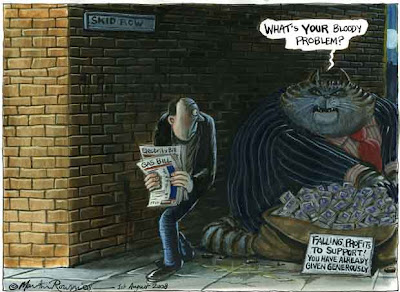 Is it just me? Why do we have so many different power providers in Britain - each with its own range of complicated payment schemes? And where is the evidence that all of this "competition" is good for consumers?
For the last year, Shirley and I have been paying £84 a month for all the gas and electricity we consume in our moderate semi-detached home in the suburbs. We have never been in the red. In fact, our payments to "E-on" have normally been comfortably "in credit". Then suddenly, out of the blue, "E-on" tell us that their calculations have led them to conclude that our monthly payments must rise to £137 - a full £53 more than before. That is a 63% increase!
I telephoned the "E-on" monster which said that our previous "scheme" had ended in September. I said, "Well why didn't you let us know and advise us of a more economical "scheme" to replace the previous one?" But the "E-on" monster wasn't really listening. The call-centre woman just kept following her on-screen script which makes no allowances for over-heated Yorkshire puddings or rational questioning.
So I did what our illustrious government advised. I switched, after investigating the other beasts at the waterhole of power. Time for me to brush down my old sporran - we are moving over to Scottish Power! Yes Scottish Power - even though none of our electricity or gas will be piped down from Scotland. And isn't that a funny thing? All these power "providers" are not really providers at all. They're just glorified debt collectors!
Our ancestors lived in woods by water sources. There were no planning authorities. You could grow your own crops, pick your own berries, hunt your own rabbits. You made your own fire and your own light. These things were fundamental. Now we seem beholden to great gods of power for the energy we need. They sponsor football matches and power boat races. They give us Tesco points but in the end we - the general public - are just cash cows to them, held to ransom by monstrous organisations that are more interested in graphs, spreadsheets and the insatiable greed of their shareholders than in the basic rights of ordinary citizens. Power really does corrupt.
- October 21, 2011