Like thousands of others visitors to Stanage Edge, I have often noticed a large windswept building about half a mile due east of the edge on a vast tract of open moorland - a good distance from any public footpaths. I referred to it earlier this week. It is Stanedge Lodge. The private moors around it make ideal grouse shooting country and it's clear that past occupants of the lodge were intent on enjoying that upper class "sport". There are several grouse "butts" and more than a hundred large flat stones were specially hollowed to allow rainwater to gather for the grouse. Apparently, the birds find the acidic water that gathers naturally in peaty hollows undrinkable.
Yorkshire has enjoyed some fantastic weather this October but Thursday was an unsettled day with cloud and rain so I toddled off to the local studies room of the city's Central Library - intent on finding out more about Stanedge Lodge. I was there for two hours but came away little wiser than before. It's almost as if the history of the place is concealed behind a veil of secrecy.
I studied an ordnance survey map of the area dated 1931. Then the large pine plantation due east of the lodge didn't exist so the property would have been even more exposed although the nearby small deciduous Broadshaw plantation was mapped.
In "Sheffield Topic" (August 1982) - a magazine that is no longer published - I discovered that the lodge had been up for sale for £50,000 and that it boasted seven bedrooms and seven acres of land but had no mains electricity. The article claimed that the lodge used to be called Lumley Hall and part of the building dated from the eighteenth century. There was also this remark - "the history of the property seems somewhat patchy".
"Westside" is a free magazine that is only distributed within Sheffield's wealthiest suburbs. In the December 1990 edition, there were a few black and white interior pictures of the lodge showing its new entrepreneurial owner a Mr Hardy in the snooker room. It seems he had been in the process of setting up an exclusive clay pigeon shooting facility called The Redmires Sporting Club and there were plans to turn the lodge into a country hotel. There were tantalising references to "visiting royalty" and antique graffiti and the reporter called the place an "18th century shooting lodge".
If the lodge was built in the eighteenth century, the building process would have been as monumentally difficult as erecting a small pyramid and just getting up to that isolated location on horseback, in carriages or on foot would have made for an extremely long and arduous journey.
So, as I say, I am not much wiser about Stanedge Lodge. I will keep my eyes and ears open to discover more and perhaps I'll make a more determined visit to the local studies library or pose a couple of questions in the online Sheffield History Forum. Funny how such questions can get under your skin and gnaw away at you like ticks. This was Stanedge Lodge on the horizon - viewed from a remote moorland reservoir yesterday afternoon:- 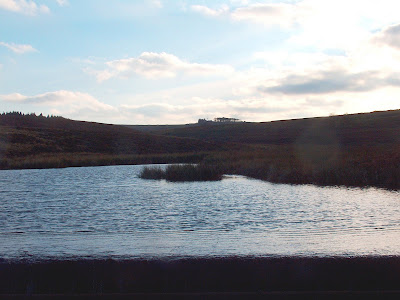