This is what Wikipedia has to say about Stanage Edge:-

Stanage Edge, or simply Stanage (from "stone edge") is a gritstone escarpment in the English Peak District, famous as a location for climbing. The northern part of the edge forms the border between the High Peak of Derbyshire and Sheffield in South Yorkshire. Its highest point is High Neb at 458 metres (1,503 ft) above sea level. Areas of Stanage were quarried in the past to produce grindstones, and some can still be seen on the hillside—carved, but never removed.

Today - October 26th - was again a really beautiful autumnal day. Visibility was marvellous. I tried - but ultimately failed - to find a neolithic stone circle on Bamford Moor about eight miles west of our house. But in the meantime I took several photos of the landscape.
Here's Overstones Farm, nestling beneath the millstone edge:- 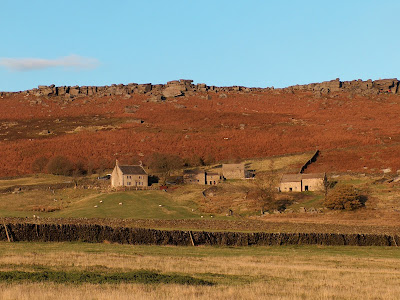 And here's an ancient cairn - some thousands of years old - on Bamford Moor - looking west to Stanage:- 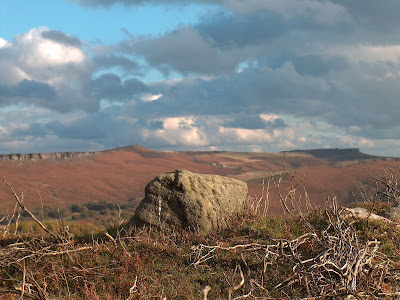 Yesterday, I was behaving like a fugitive on the run as I found my way through a pine plantation immediately east of Stanage Edge to take this picture of windswept Stanedge Lodge. It was a private hunting lodge, built in the mid nineteenth century and it is the highest inhabited dwelling within Sheffield's city boundaries. There seem to be very few photos of this substantial building and because I can find so little information about it on the internet, I plan to discover more at the city library in the next few days. I have discovered that one or two incongruous businesses now list Stanedge Lodge as their "office" address. Very peculiar -especially when you remember its isolation and its rough access track that leads through the pine woods up on to inhospitable heather moorland. 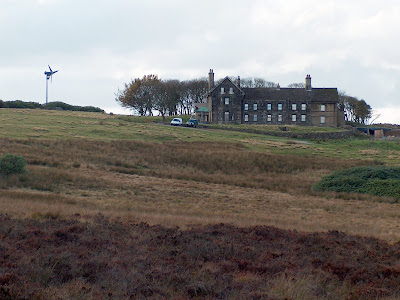