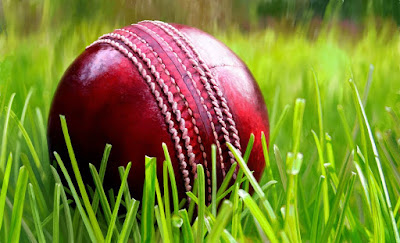 There's a common expression in England. It is often applied when someone has done something that is rather unacceptable. "That's not cricket!"

Cricket is supposed to be an honourable game in which  people play by the rules. Manners and good sportsmanship are meant to be at the heart of the game. It's all about doing your best and accepting with good grace that there will be winners and losers. May the best team win.

Now a cricket ball is a hard leather orb with a seam down the middle. Bowlers can bowl it at a hundred miles an hour. A new ball will be shiny and smooth on each side of the seam so it tends to fly through the air truly. However, if one side becomes scuffed up or altered then in certain conditions the ball will swing when it is bowled, giving the bowling team a slight advantage over the batting team.

It is against the rules of cricket to deliberately affect the condition of the ball by rubbing anything into its leather surface - such as dirt, saliva made sticky by a boiled sweet, sugar or anything else. This is just not cricket - it is in fact cheating. 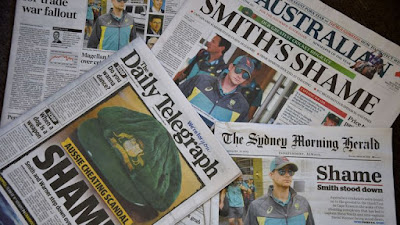 Last weekend, a gifted Australian cricketer was seen on camera, using a piece of yellow sandpaper to alter the surface of the ball during a test match in South Africa. When challenged by reporters about this he admitted his guilt but not only that, his team captain Steve Smith - currently the best batsman in the world - admitted that the cheating had happened with his full knowledge and approval.

Boiling with rage mixed with shame, Mr Turnbull, the Australian prime minister, has weighed into the resulting debate, condemning the cheaters who have now all been sent home from the South African tour in disgrace. Not only have they let down their team and their sport, they have let down their country. He said, "This has been a shocking affront to Australia."

Sport is important in Australian society. It provides a rallying point and has become an integral feature of  the Australian national identity. In swimming, rugby league, rugby union, tennis and cricket Australia has always been a fearsome nation. They are natural winners but though they play hard, desirous of victory, they have also always had a reputation for playing fair.

Steve Smith, Cameron Bancroft and David Warner have changed that perception. Their actions were pre-meditated, deliberate and most unsporting. It was just not cricket and probably for the rest of their lives they will be paying the price of this blatant wrongdoing.
- March 28, 2018