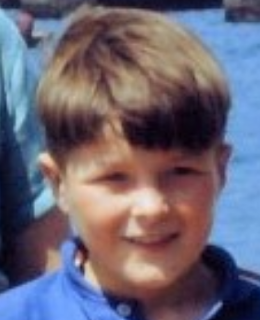 As boys, my three brothers and I were very lucky. Every summer my parents would pack up the caravan (American: trailer) and we'd be off for five or six weeks. At first we would bomb down to Cornwall or South Wales but by 1959 we were heading across The English Channel to something we referred to as "The Continent".

In those days you wouldn't see many British families touring Europe and continental campsites were often uncrowded. We travelled all over France, Belgium, The Netherlands, West Germany, Switzerland, Austria and even down into Italy.

One summer, I believe it was 1961, our principal destination was Lake Garda, There we met up with old family friends - a childless couple called John and Brenda. They are still in the land of the living. John is ninety and Brenda is eighty seven. 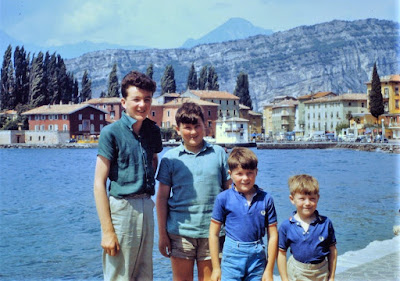 It was at the southern end of Lake Garda that John taught me to swim. He balanced me in his arms and then I took off in the silky warm Italian lake. Swimming freely was easier than I had imagined. That's just about the only thing I can remember from that holiday.

Just the other day, John sent my brother Robin a photograph that was taken that summer - probably in the form of a colour slide. I edited the picture to improve it and then set about discovering its location. It was taken at the north end of Lake Garda at Torbole. That was  fifty seven years ago.

There's my late brother Paul with his Elvis quiff. Then there's Robin who was a big lad at the age of ten. I am the next one in the photo - seven years old coming on eight and there's my younger brother Simon who was five. Yes, fifty seven years back - a long time ago with our entire lives ahead of us.
- March 03, 2018