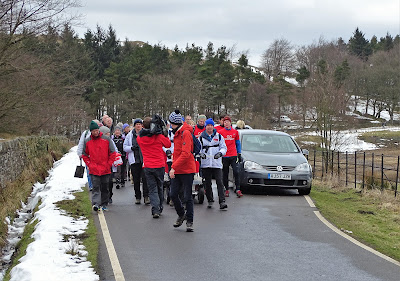 Here in Yorkshire, the BBC sponsors a regional news programme called "Look North". Mrs P and I watch it regularly and we are very familiar with the main presenters. As is the wont of regional television news shows, "Look North" occasionally organises televisual charity-related projects.

This month "Look North" sought to mark its fiftieth anniversary by arranging a week long sofa push -taking a red sofa on a trolley to fifty different locations within Yorkshire. They are raising money for the Sports Relief charity. Yesterday they came to Sheffield.
Paul Hudson and Harry Gration 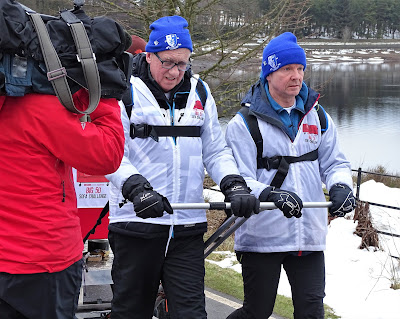 I drove up to the nearby reservoirs at Redmires and sat inside Clint reading a novel. The remains of recent snows were still  on the ground, settled in hollows and drifted up against the drystone walls. I bumped into an old friend who has finally retired. He has a rescue dog now. It was sitting in the back of his car smiling back at me. My friend said that his wife had named it Deefa which sounds like a Hindu goddess but he said it was simply a shortening of "D for dog".

Soon a colourful bunch of walkers appeared on the far side of the top reservoir. It was the "Look North" team with their support staff, cameraman and an array of local followers. As luck would have it, this little caravan stopped right in front of the spot where I was standing to take stock and prepare for the arduous climb up to Stanage Pole.

You will never have heard of these people but to us they are very familiar television celebrities. There was the cheeky weather presenter - Paul Hudson whose nightly quips are legendary. And there was the lovely Amy Garcia from Wakefield looking as fit as a fiddle but surprisingly not wearing gloves and there was the genial uncle and anchorman of thirty years - Harry Gration from York.

A young physiotherapist began to pull up Harry's right trouser leg and he spoke directly to me, "You'd best look away now!" She was checking out his bad right knee, adjusting the knee support and blasting some magic spray at the joint.

Soon the rest stop was over and the motley crew began their ascent up the old Roman track heading towards Stanage Edge and down to Hathersage. This would be a taxing walk at the best of times but pulling a trolley along with a red sofa aboard in wintry conditions made it much more challenging.
If any of my millionaire American, Russian, Australian, Italian and German visitors would like to donate spare money to the BBC Sofa Challenge, please go here.
- March 21, 2018