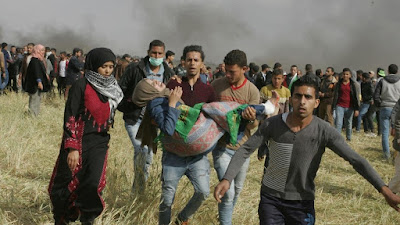 I don't know how the Israeli-Palestinian conflict will ever be solved. But what I do know is that shooting unarmed protesting citizens with live bullets is against international law and is morally wrong. Sixteen people were killed on the edge of Gaza yesterday and hundreds of unarmed citizens, including many children,  were injured. They were shot by the Israeli army.

Instead of hanging their heads in shame, unapologetic Israeli spokespeople try to justify the murders and injuries by saying that the demonstrating Palestinians were preparing to attack the fence that Israel erected to turn the Gaza strip into a kind of prison camp. After the shootings, the fence remained undamaged.

There are also reports that the Israeli army used drones to drop canisters of tear gas on the protesters who were gathering within their own territory - not on the Palestinian land that Israel  purloined.

I expect that these terrible events will effectively be swept under the carpet. The United Nations will fail to step in in any meaningful manner and Israel will continue to enjoy the unqualified support of The United States now happily boosted by President  "Me-Me-Me"  Trump.

You may have guessed that my instinctive sympathies lie with embattled Palestinians. However, most certainly and quite definitely, this does not make me anti-Semitic. It is the self-righteousness and the brutality of the Israeli state that I seriously question and not the Jewish faith.

May those who were murdered yesterday rest in peace. They were people too. 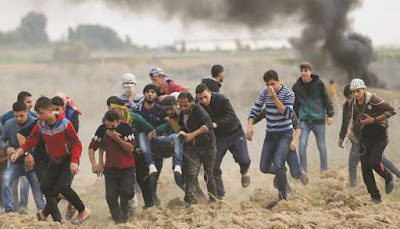