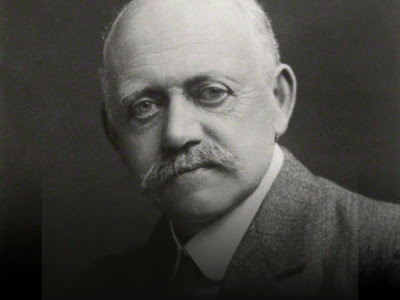 Meet William Willett (1856-1915). This moustachioed fellow is largely responsible for the unnecessary hassle that befalls every British home, business, public building and church each spring and autumn when, respectively, we are required to put our clocks and watches forward by one hour and then back by one hour. It is such a waste of time and very unhelpful  to the normal functioning of society.

Willett was a successful builder in and around London. For obscure, personal reasons he got a bee in his bonnet about changing our clocks to mark a period that would be known as Daylight Saving Time or British Summer Time. As a wealthy Tory party supporter, he was able to bring pressure to bear on influential politicians to take up his hare-brained cause.

The idea was much debated and finally in 1916 his scheme was  introduced but Willett had died the previous year so he never got to endure the tiresome process of putting timepieces forwards and then back each year.

There are those who still make convoluted arguments that support the continued existence of British Summer Time but I am with the camp who see it as an utter nuisance. Normal life simply does not need this bi-annual disruption. Apart from anything else, the world we live in now is less entrenched in its time habits than the world that Willett occupied.

P.S. Willett is the great-great-grandfather of Chris Martin who is the leader of the extraordinarily successful English rock band - Coldplay. He must be gutted.
- March 24, 2018