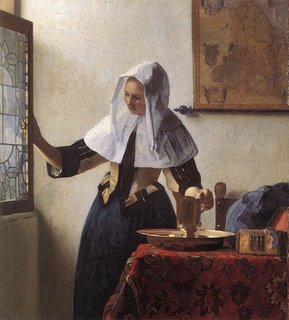 Thanks to visitors who left notes about their favourite paintings and artists.

To the left we have Vermeer's "Woman With A Water Jug" selected by Alkelda the Gleeful. This beautifully composed, tranquil and exquisitely painted canvas hangs in the New York Metropolitan Museum. Jan Vermeer of Delft in Holland created the picture in the winter of 1664/65. 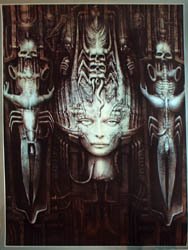 Next in line is a sample painting by H.R. Geiger - an artist admired by Yorkshire Soul. This particular canvas is called "The Spell II". It seems that Geiger specialised in often rather dark flights of fantasy which have won him something of a cult following. His images are sometimes found on skateboards.
Next there's a sample painting by the Boston-trained Chinese- 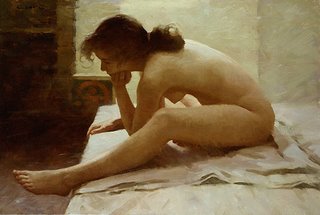 American artist Zhuo S. Liang - a painter put forward by Crabcake. This piece is simply called "Seated Nude" and it hints at the precise graphical style that has won this artist so many admirers in east coast American board rooms where his heavily price-tagged pictures may often be found.
And finally for my southern friend "By George" who used to teach Art History, there's an example painting by Michelangelo Merisi da Caravaggio - "David" holding the severed head of Goliath. Caravaggio was a very influential artist in his day, leading the dev 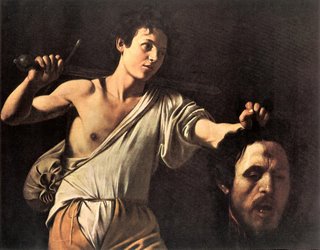 elopment of a uniquely baroque style and challenging Italian notions of what painting should be with his new takes on old themes.
Good art both helps us to reflect upon life and enhances it. In appreciating paintings we should find our own paths, our own preferences, learning to look with an open heart and an open mind, glorying not just in the techniques and the patience of the artist but also in the vision, the meaning and the socio-historical milieu from which each canvas has grown. Oh shit...I'm sounding like a boring art historian... Wake up at the back! 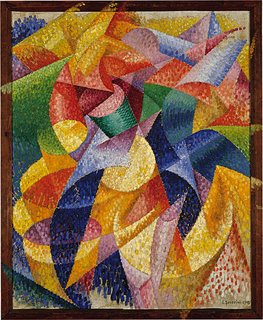 The latest addition to my online art gallery was suggested by "Steve". It's Gino Severin's "Sea Dancer" painted as early as 1914 - as World War I broke out in Europe. This is an abstract painting ahead of its time in which bold colour, texture and movement hint at the rowdy and unpredictable power of both the sea and of humanity as we strode confidently into a new century, masters of our planet.
- March 30, 2006