This is a general warning to the inhabitants of Blogworld concerning identity theft. Unwittingly, I have been the innocent victim of two cunningly fraudulent assaults upon my character. In the latest fraud, a redneck hussy from North Carolina, sometimes known as Amy Carol, otherwise Mrs Friday's Web, has attempted to mock me by superimposing my head on a "Fantasy Island" promotional picture from the nineteen seventies. I wish to state categorically and emphatically that at no stage in my life have I ever appeared on a TV programme with a French midget called Tattoo. The idea of me befriending anybody from France is utterly ridiculous. If I had the technical skill to do it, I would superimpose Ms Amy Carol's head on the body of Roseanne Barr and we'd see how she'd like that! A previous fraud involved a simian beast from Seattle who plonked a chef's hat on my head in order to amuse the blog-surfing public. This was most distressing. See below, the original "Fantasy Island" picture alongside the cunning handiwork of the North Carolina sex education specialist:- 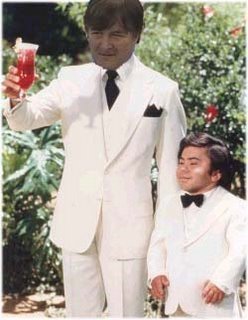