Whilst blogging, I have sometimes encountered the term "rant"/"ranting"/ "having a rant" etc.. It's not a term I meet often outside the blogosphere. Anyway, now I grasp what it means, I'm going to open cupboards in my brain and enjoy a good old Friday rant of my own - supplementary to the enervating rant I had recently about mobile phones/cell phones. Although this ranting could easily cover a hundred topics, I'm just going for four:-
1. LITTER This stuff is everywhere. Strangely, you rarely see anyone in the act of dropping litter. It happens so quickly. Hand on heart, I can honestly say that I have never dropped a 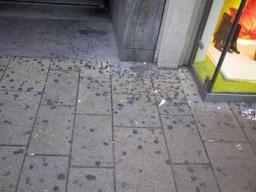 single piece of litter in my life so at times if feels like I'm living on an alien planet. I hate to see cigarette ends on the pavement or smoking butts tossed from cars but a particular type of litter that really gets my goat is chewing gum. It takes so long to degrade. Pavements are spattered with the stuff - especially outside places like fast food outlets. What's wrong with these people? One day there'll be a civil war between the litter louts and the urban environmentalists. I'd love to beat some sense into those who carelessly toss away their waste, spoiling the look of the world we all have to share.

2. SPEED CAMERAS They have sprouted like mushrooms around the United Kingdom and you'd be hard-pressed to find a driver who hasn't been caught by one of the damned things. You can't argue with a camera but the truth of the matter is that the necessity for slower speeds will vary throughout the day or the week. They don't even indicate the speed limit on the actual cameras because the real truth about these things is that they are there to raise revenue. With my team of urban guerillas, I'm planning to obscure each lens cover with a film of sticky backed plastic or perhaps produce cans of spray mud to obliterate licence plate details. 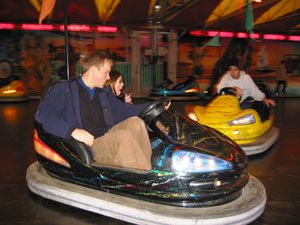 3. BEING BUMPED Is it just me who experiences this? People are always carelessly bumping into me. I might be in a supermarket looking at the cat food, the aisle might be two metres wide and then someone comes along with a trolley and yep - surprise, surprise - they bump into me. Frequently, there's no apology. The same happens in pubs. I look around at the gap that could have taken a small car and the moron who bumped into me is on his way to the bar or the lavatory with not so much as a sorry. In contrast, I glide around very aware of the need to respect other people's personal space. If I do nudge someone accidentally as I squeeze to get past them, the word "sorry" blurts out of me quite instinctively.
4. SUPERMARKETS. In the UK, the big supermarkets like Tesco and Asda sometimes seem more powerful and influential than the elected government. They expand like space monsters

into every area of life - from car insurance to funeral direction. They pretend that they care for their customers and the environment whilst accruing obscene profits. It's like a cartel. They underpay their staff and squeeze farmers around the world with remorseless cruelty. Another thing I dislike about them is the vast range of goods on offer. Life shouldn't be that complicated. We don't need so much choice. I prefer to do our family grocery shopping at the Danish budget supermarket - "Netto" which has limited choice and undercuts the giant

supermarkets by miles. In England, many people are snobbish about where they shop. Perhaps I'm an inverted snob but I'm always glad to sing the praises of "Netto", "Aldi" and "Lidl". We have saved loads of money shopping in these stores - money that we can then spend on holidays or treats like meals out.
- March 03, 2006