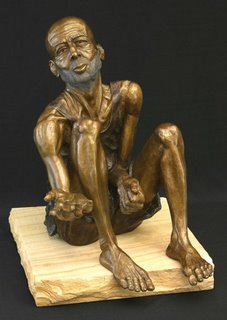 I have seen beggars in many places. We have a few in Sheffield. They huddle in doorways, often with faithful mongrels on ropes. Their eyes are dulled and sunken. Sometimes they sell "The Big Issue" - a UK homeless magazine intended to help break the begging cycle and lift self-esteem. I usually walk by. It's not a magazine I enjoy reading.

Last Easter, I went with my family to California. We landed in LA at around 17.30, picked up a hire care and headed for Santa Monica where I had pre-booked a Travel Lodge overlooking the famous pier. It was Saturday night and though we were jet lagged, we needed something to eat so made our way to Third Street - Santa Monica's most popular and rather exclusive shopping street. This was California, the land of plenty, many years after Steinbeck's "The Grapes of Wrath" and what did we see that very first night? American beggars. Some of them with shopping trolleys piled up with collected stuff and clothing. They were there lurking on the sidewalk as wealthy shoppers nipped in and out of "Abercrombie and Fitch". We stayed in Santa Monica/LA for three days and saw many beggars, hobos, down-and-outs - call them what you will - just a couple of miles from Beverley Hills and the coast road to Malibu. An AmericanAsian shopkeeper told me he hated them. They were always stealing stuff. He sounded like a white Australian slagging off the "abos".
And I have seen beggars in Rome, Paris, Atlanta, London, Madrid, Budapest, Glasgow, Copenhagen, Dublin, Durban (South Africa) and lots of other places. What should I make of them? Should I walk on by? If my life had worked out differently, might I have been a beggar? How did they end up in this position? Should I put my hand in my pocket and give them some of my hard-earned money? Would they simply spend it on drugs or booze? Would it ever make a difference?
There's a young beggar who lurks in Sheffield's suburban heaven. You see him outside the all-night Spar shop - lank haired and cold. Once I bought him a sandwich and a couple of cans of beer. He was gobsmacked with delight. I wonder where he slept that night and should I make him a little shelter in my underhouse workshop? In fact I could house an entire gang of beggars down there.
I'm not religious but I admire Jesus for gravitating towards beggars rather than moneylenders and rich officials. I'd be interested to read other bloggers' views on beggars - these shady people from the underworld - a flipside for Rodeo Drive or London's high life - splashed by Mercedes and Jeep drivers - reminding us all that life is fragile and we shouldn't take what we have got for granted.
- March 22, 2006