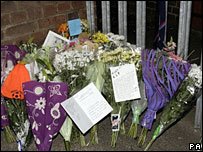 Flowers for Kayin Prince
A while back, I included a letter in this blog. It was a real letter that I had sent to the parents of a fifteen year old "student" with a long history of unwelcome behaviour - who launched a foul and unjustifiable verbal assault upon me. I referred to him as "Warthog" (see "Letter" in March posts). He was excluded from school for five days and then returned as bad as ever. Last week, two female colleagues called me to a corridor situation where the warthog had ripped some panelling off the wall - an act of mindless vandalism - and was then grinningly denying it. I investigated this incident, interviewed pupil witnesses and then spent half an hour filing a detailed report - the result being zilch! The oaf was back in school the next day being as obnoxious as ever.
Today, in the school's morning briefing, it was announced that arrangements are being crafted to take the warthog out of school for two days each week on a work placement scheme - and there's hope that this may be extended to five days shortly.
Warthog is just one of the horrible, arrogant shits that well-meaning teachers like me have to deal with each day. They are full of themselves, lazy, often "damaged" by marital break-ups, kids who haven't done anything or seen anything but imagine they know everything. To counterbalance this unpleasantness, yesterday I received a bottle of malt whiskey and a card from Stacey who I have taught for five years. This is what she wrote in the card:-
Dear Mr Pudding,
Thank you for all your help over the past five years. It has been much appreciated and it has been a pleasure to be in your class.
Even when I found things difficult or didn't quite understand, you were always there to help me out. I will miss you! Thank you for everything!
Love, Stacey H (Class of 2001 - 2006)
Such responses ought to be worth their weight in gold but you find yourself thinking more about the warthogs than you do about princesses like Stacey. Yesterday, a fifteen year old boy - Kayin Prince - was stabbed to death outside a school in north London. May he rest in peace and may the British government and British society in general start to really address this cancer of youthful disdain and ominous ill-discipline in our midst - instead of making excuses and tinkering with the wrapping paper. We need a sea change. 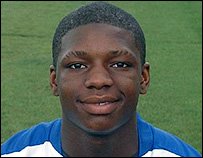