Let's leave football aside for now. I'm going to introduce you to an old friend of mine. He's called Chris and he's the same age as me. I met him in the seventies. Don't know why but as a university student, I thought I'd sign up for the British Universities North America Club and go camp counselling somewhere in the good old US of A. They placed me in Ohio, just outside Cleveland and 'twas there I encountered Chris. He was the specialist art counsellor while I was just a general counsellor with my little group of boys - The Wyandottes.
Chris and I got close (no not that kind of close!). We shared a red cabin together in the woods. There were two beautiful summers and we were mates. He was very kind. He would lend me his car or take me back to his parents' house just outside Youngstown. We drank beer together at "Skip and Ray's" or "Chuck and Janine's". We had lots of laughs. In his yard, I sat on the diving board over the kidney-shaped pool as a bevvy of American beauties in polka dot bikinis listened to me sing "Dream, dream, dream... whenever I want you, all I have to do is dream". For a moment I felt like Elvis. 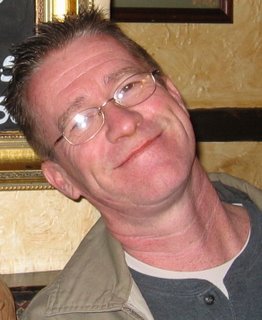 Chris was good at cooking. He had a wild edginess to him. He found it hard to relax. He loved people and when things went wrong with people he agonised over the issues. Sometimes he would wake up in the morning and complain about how hard he had been dreaming. He would often be the life and soul of the party but then his moods would threaten to plunge into black despair. I remember him on the stage at a wedding reception back home singing "Life is a Cabaret" and damn it, he knew all the words. He took little groups of summer camp kids down to the creek to gather clay and they would return to make primitive pots and figurines with the stuff.
I got to know all of his family. At the heart of it was his mother, Flo. Everybody knew her as Flo - even her own kids. In the morning she would just float around her pool on her back, letting the filtration current gently whisk her around. Like Chris she was very kind, allowing me and other camp counsellors to simply take over her house at weekends.
After leaving university, it took me a long, long time to return to America. It was a place where I had fallen in love with a woman counsellor called Donna who later dumped me and it was a place where I felt I belonged. I had had such happy times there and some of this was down to Chris.
Anyway in 2002 with Shirley and the kids, I returned there. I let Chris know we were flying into Atlanta. We'd be down in Florida for a while and then back up to Savannah, Georgia. With his daughter Abby, he drove eight hundred milles to meet us in Savannah - the first time I had seen him in twenty six years. In so many ways, neither of us had changed.
Then in 2003, we returned to America. This time our trip took in Boston, Niagara Falls, Harrisburg and New York City but arguably the highlight of the trip was staying with Chris and his family on Lisbon Road, near Canfield OH. He married Teresa in the same year I married Shirley. Their wooden home was so beautifully designed - not ostentatious or garish - just a lovely spacious home with a barn and a garage and woods all around. He had placed a Union Jack flag out front to guide us. We had a lovely time there and it was great to see my two getting along with his girls and my Shirley was clearly enamoured by the whole experience. This was the real America - faraway from the ocean, where ordinary people eke out their lives and cherish what is dear to them, pursuing the elusive American dream.
Sadly, Teresa and Chris divorced in 2004 though some hope for reunion still 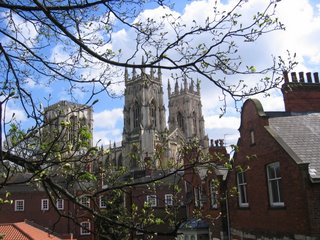 remains. Chris had never been to Europe so out of the blue he decided to take a trip over here. We met up again on Friday. The idea of Britain had often occupied his thoughts and his imagination. He was knocked out by the stone and brick buildings of Sheffield. I took him to his first English pub and we drove up to York where he saw the magnificent York Minster and we had tea in Bettys Tearoom. Part of the reason for his trip was to visit Wales which Flo sees as her ancestral homeland. At Sheffield station, Chris kept saying "Excuse me" to the ticket counter guy who had never even heard of the "Freedom of Wales" ticket that Chris had investigated over the internet.
Yesterday, he set off on his Welsh adventure, informing me and Shirley that he never wears a watch simply because this allows him to strike up conversations with complete strangers. He has bundles of energy and an engaging boyish naivetee. Jokingly, he kept saying, "What happened to you man?" and I said, "I'm sorry Chris, I grew up!" but I know how much teaching school has sucked out of me these years past. We'll see him again at the weekend. I'll take him to Manchester airport and it might be years, if ever, before I see him again - that crazy Yank who dances like a mule!
- May 02, 2006