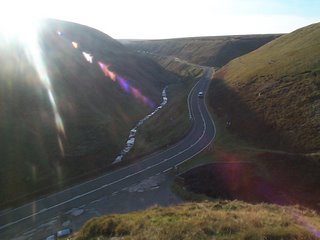 On Sunday morning, I drove Chris over the Pennines to Manchester Airport for his flight home. We took the winding Snake Pass with its excellent views of Ladybower reservoir, the wild moors of The Snake summit and the curvaceous descent into the old milltown of Glossop. Sheep dotted the early morning hills beyond the ancient jigsaw patterns of dry stone walls - like the land's ribs - as a thin mist swirled in slow motion over the tops.

Chris said, "I'm so ashamed. What have we got to offer in America compared with all this?"

He had loved his first visit to the UK. He ate his first pork pie and drank his first pints of English ale. He visited three major castles in Wales, York Minster, Sheffield Cathedral 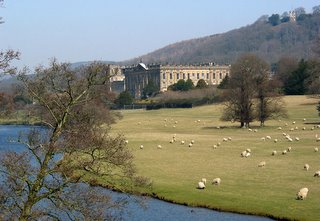 and the palatial Chatsworth House in Derbyshire - home of the Dukes of Devonshire - whose snake symbol - not the bends in the road - explains the name of the Pennine pass between Sheffield and Manchester.
We went down the Blue John mine where the rough and ready guide asked Chris, "Are you one of them thick Americans or are you one of the bright ones? Cos we get a lot of thick ones over here!" He went on to explain how one American visitior had asked how many undiscovered caves there were in the pothole system. "Err five!" the guide had grinned. Chris claimed to be in the "bright" camp.
I thought of calling this post simply "Friendship". It was so good to see Chris again. As I drove back over the hills towards Sheffield, I felt somehow sad and deflated. I connected with Chris all those years back when we were in our early twenties and now three decades later I find that the connection is still very much there. It's so sad to think he won't be in "The Banner" this weekend, won't be laughing with me, won't be bringing up old memories, won't be there conversing with me with words that are underpinned by mutual respect and affection - even though we are quite different in lots of ways.
I feel so sad that his marriage with Teresa is over. Choosing divorce is normally quite fatal and it's only in films and romantic fiction that divorced couples reunite. I hope I'm wrong. I hate to think of his daughters flying the nest and leaving him on his own up Lisbon Road with his pain and self-doubt. If you're reading this Teresa - please give him another try. Get some marriage counselling. Lay your cards o 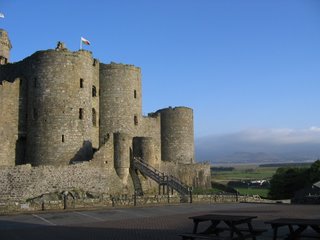 n the table. What does Chris have to do to change - to win your heart again? Twenty four years and three lovely children - that's a lot of miles, a lot of water under the bridge. Is this metaphorical car crash what you really want? What's been lost?
- May 09, 2006