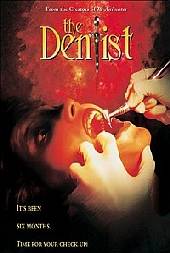 "Dentophobia" - A morbid fear of dentists.
Some people hate spiders, others are afraid of dark churchyards at night. Some people shiver at the thought of giving a speech to a small crowd of work colleagues while others tremble about small spaces, open spaces, the number thirteen, flying on aircraft etc.. Me? I hate dentists. I always have done and I don't just mean hate them, I react physically to them. I sweat like a pig, my muscles tense rigidly. Even when I need to see a dentist, I will put it off for months until the pain is such that I cannot sleep and then I go - like a condemned man trudging to the gallows.
My current dentist - I'm always moving on - comes from Poland and she doesn't speak much English. I have never seen her mouth because it is always hidden by a surgical mask. What the hell does she think she is going to catch off me? Or perhaps behind that mask there are two bloody Transylvanian fangs. Her favourite word is "okay" which she says in various ways and then every so often she will mutter threateningly in her broken Polish-English, "Don't be afraid my dear..." which of course makes me more afraid than ever. I have had to see her six times in the last two months and once I was in that goddam chair with the light scouring down upon me for two hours. My tensed muscles had by that time turned my body into stiff concrete. Although it's handy, the fact that she sees me on Sundays suggest a pagan heritage.
I wonder if there are any dentists out there who have blog sites. Somehow I doubt it. The activity seems too human for a dentist but if there was a dentist-blogger then the site name would surely be...
"The Tooth Fairy"
because dentists have limited imaginations... and perhaps this would be an entry for May 21st 2006.... 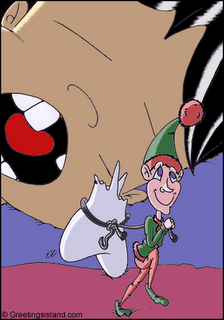 " That sweaty sucker came to see me again today. Is he a man or a mouse? He trembles like a weeping willow tree. I kept the freak waiting in the waiting room for twenty minutes - so he could peruse our odious collection of old magazines and tremble some more. Then I called him up to my torture chamber. Again he said "Good morning!" in a cheery English kind of way but I just ignored him and adjusted one of the drills. I made sure to twist the headrest in such a way that his head would be grossly uncomfortable.
As I drilled at the perfectly healthy tooth that I had condemned just for my amusement and financial gain, I made sure that the suction device made its usual gurgling gutter noise, the steel nozzle pressing painfully into the soft pink tissue beneath his tongue and failing to suck up even one millilitre of saliva and water. He gulped like a goldfish, as if drowning and behind my mask I sneered at his pathetic attempt to show manly valour. I had made sure that the novocaine I'd injected directly and deliberately into a nerve was insufficient to numb his tooth and he let out a pathetic whine as I drilled vigorously - tears forming in his little piggy eyes. "Don't be afraid my dear!" I whispered. For my pleasure, I have arranged another appointment for two weeks hence. The worm is too polite to challenge my authority. Next time the drill will accidentally pierce his cheek. Oh being a dentist is so fulfilling!" (Translated from the Polish)
- May 21, 2006