Recently rediscovered in a remote valley in the Balkan state of Verifica is this strange creature known as the Feliguin - or the Xqjjsqx in Verification. The Feliguin is a throwback to prehistoric times when it is said that the beaches of Albania and Montenegro were carpetted with these miaowing rock-hopping creatures. This particular Feliguin has been christened Cliff. He was found trapped in a reed pen intended for baby goats:- 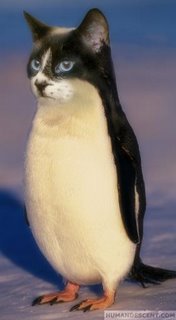 Goatherd Mr Ffrchk Dqjurt said, "I had just returned from a morning's strenuous goatherding. My wife Bkbtch had been instructed to weave a new pen the day before. I was going to inspect it when I heard a strange miaowing sound and a scrabbling of little flippers and there he was - the first feliguin I have ever seen, his left wing caught in the reeds. I decided to keep him as a family pet and Bkbtch named him Cliff after the English pop star Cliff Richard who passed through Verifica many years ago during the making of the musical film - "Summer Holiday"."
Leading zoologist, Professor Qwrsttij Vuvtyqw at the University of Verifica said, "He's a cute little chap isn't he?"
- May 24, 2006