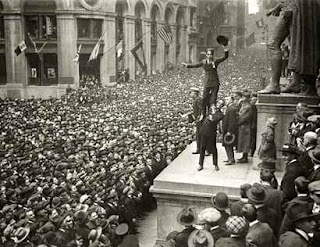 Chaplin on the shoulders of Douglas Fairbanks at a Liberty Bonds rally in New York (1918).

Charlie Chaplin died on Christmas Day 1977 at his home in Switzerland. Although he was by no means a "communist", he departed the USA in 1952 feeling bitter and anxious about hysterical accusations that flocked around him. This clownish little man was a giant of the silent movies. His place in American history and the history of film should have been assured but it wasn't until he was an old man, two years before his death that he was finally knighted by our queen. Until then, the question of honouring Chaplin had been a thorny one, given America's post war witch-hunts. Similarly, it wasn't until the nineteen seventies that Chaplin was honoured with a star in the pavement on Hollywood's famous "Walk of Fame".

Clearly, Chaplin always had a social conscience. His famous bowler-hatted tramp gave more than a nod of sympathy to the downtrodden masses and some of his films - including "The Great Dictator" and "Modern Times" had political undercurrents beneath the ribald laughter they evoked. Chaplin once said, "The hate of men will pass, and dictators die, and the power they took from the people will return to the people. And so long as men die, liberty will never perish." These were not the words of a clown even though that is how he would often describe himself. There was more to Charles Spencer Chaplin than met the eye. 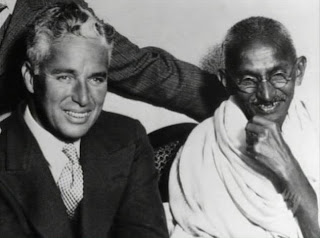