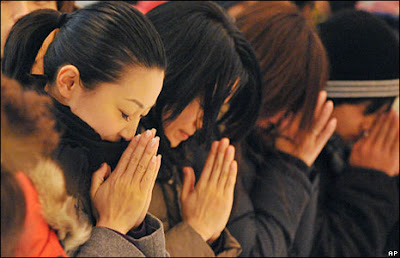 This is my last blogpost of 2008. Outside the ground is frozen "hard as iron" and the thermometer reads minus three. I was the last patient in the doctor's surgery today. Nothing real bad just an irritating cold sore/fungal infection in the corner of my mouth. Just when I think it's healed, I laugh too much or open my big gob too wide for an apple and the corner cracks again and I'm back to square one. Possibly my last act of kindness in 2008 was insisting that a distressed young woman, who arrived in the waiting room after me, saw the doctor before I went in.
I just wish I'd gone down there with the book I'm reading at present - "The Road to Nab End" by William Woodruff. I could have devoured three chapters in the time I had to wait. It is a brilliantly observed autobiography - mostly set in the poor streets of Blackburn, Lancashire in the 1920's. The last chapter gave a child's eye view of the General Strike of 1926 - fascinating.
Wonder what 2009 holds for us all - both in the macrocosmic world that fills our news channels and in the microcosmic worlds that we really inhabit, surrounded by our possessions and the souvenirs we have gathered, affected by our friends and neighbours and the precious ones we call "family". One of my friends - Ian - told me that his mother had died on December 23rd, just six weeks after his father was buried. To lose both parents in such a short time must be really awful. Though he may wish to, I don't think he'll forget 2008 in a hurry.
What do we want for 2009? On the world stage, I want Barack Obama to get off to a good start, I want to see justice and peace in Gaza, I don't want to see any more natural disasters or Japanese whalers pretending to be engaged in scientific research. No more destruction of the Amazon rainforest. No more gas guzzling 4x4 vehicles on city streets. No more second homes sitting empty while homeless people shiver. No more unwatched computers flickering through the night in empty public buildings. No more "terrorism" such as mindless and cowardly suicide bombings.
And on the home stage I want us all to be healthy and bright, making the most of life, enriching our inner selves with interesting experiences. Patience. Goodness. Humility. Laughter. Noticing fundamental things like cloud formations, spring bulbs breaking through the top soil, birds moving across the sky, the sweetness of honey. And I want us to be kinder to ourselves. Less self-doubt, less self-recrimination, less beating ourselves up. To be alive is a wondrous thing. Let's get to December 31st 2009, fully intact, feeling we have achieved some things that are worth acknowledging - if only to ourselves.
Happy New Year Everybody! 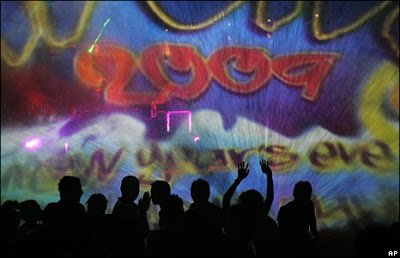