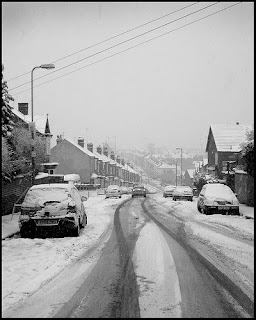 Right: Coronation Road
Sunday afternoon I drove down to Birmingham - killing two birds with one stone. Firstly, to meet up with our daughter whom regular visitors to this humble blog will remember is at university there. Secondly, to attend an exam board training meeting at the Novotel on Broad Street. How cunning of me to cause this co-incidence...
Last year, Frances was in "halls". This year she is renting a house with six other students on Coronation Road in Selly Oak, less than half a mile from "uni". And no, I didn't say Coronation Street - after all that is in Weatherfield, a suburb of Manchester.

I had not visited this terraced house before. For a few fleeting moments, I was transported back to my own university days in Scotland. Was it really thirty two years ago? There was youthful energy in her house, a sense of going places and getting on with life. Socks and T-shirts were drying on the banisters. Scattered all over the entrance hallway were takeaway pizza mailings and free newspapers that would have taken around twenty seconds to gather up and place in the recycling bin.
Frances's academically brilliant housemates clustered on the sofas, glued to a little portable TV as they munched unhealthy looking slices of pizza and oven chips. They were delighted with the two folding chairs I had brought from Homebase. It meant that at least they could eat at the table sometimes. The chairs cost me £8 each. Why hadn't it occurred to them to make such a useful investment?
I gave our daughter's room 4/10 for tidiness. The wardrobe appeared to have burst open, spewing clothes all over the floor. The double glazed windows that the "kind" student landlord had had fitted last spring were as draughty as a church bell tower because someone had forgotten to run some sealant down the middle joint. Note to self - remember sealant gun on next visit!
With lovely daughter in car, we revisited The Balti Triangle for dinner. A pre-meal beer in the old-fashioned "George" and then into the superb "Al Frash" for the best lamb balti this side of Bombay. The nan bread threatened to float away again. We spoke about her placement in America next year - at Birmingham Southern College in Alabama. She's so excited about it and I am so jealous.
Back at Coronation Road, the other "stewdies" had no idea where the Balti Triangle was or even that it existed. As "Strictly Come Dancing" flickered on the little box, and student excitement rose, I headed off for the £38 a night Etap Hotel to finish some marking before bed. I remembered the parties, the booze, the intense late night conversations, the emotional ups and downs, the essay deadlines, the women, the unmade bed, the burning of the midnight oil but most of all the faces imprinted on my memory like ghosts from "The Titanic" - friends and lecturers, cleaners and porters - a university library of faces - stored in memory.
- December 02, 2008