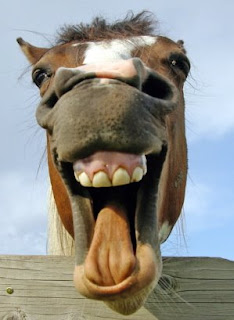 ....Ohhhh! Moooan! Grooaaan! My aching head! I swear that is the last time I ever host an awards ceremony at Pudding Towers! The mess! You should see it. Empty beer cans and wine bottles everywhere! Somebody knocked over our prized giant yucca plant on the decking and though I hate to say it, this morning I found two perfectly formed human turds on the floor of our greenhouse. Who would do such a thing?
Thank God all the bloggers have finally departed clutching their awards and nursing their sore heads. I must say the night was all a blur to me but I keep having vivid and scary flashbacks. In the snooker room, I found Katherine (Last Visible Dog) in a compromising position on the green baize as Arthur Clewley tried, unsuccessfully, to pot the black. In the kitchen, Mr R.W.Plague from Georgia was raiding the fridge with Sam from "The Golden Hill" though we had put on a splendid Yorkshire buffet for our blogging guests. "Ya see y'all we ain't chompin on no hog's trotters nor Pukka pies!" grumbled Mr Plague with a twenty four inch pizza in his hand. Sam was clutching a perfectly formed saveloy sausage.
Daphne was in the conservatory giving a lecture on the nuances of the English language as "The Arctic Fox" ran in from the garden with a pair of pink knickers on his head - hotly pursued by Hadriana from "Hadriana's Treasures!" "Give them back you bounder!" she yelled.
Upstairs, Reidski and JJ were testing the springs on my "Silent Night" kingsize bed as Jenny the demob happy teacher sifted through my vast collection of Hull City programmes with Steve from "Occupied Country" and a couple of other football crazy bloggers.
I was horrified to discover the mysterious Australian blogger Craig teaching Mopsa and Misterwoppit how to snort some strange white powder in my daughter's bedroom. I quickly guessed what it was and frog-marched Craig downstairs. He tried to resist but with him only being an Australian, he was easily subdued and I threw the blighter outside yelling, "When we send you to Botany Bay, we expect you to stay there!"
Around two in the morning we had a live beamback on my computer from Farida and Brad in Seattle. Farida was charming as always, graciously accepting her joint Best American Blogger Award for the fifth year running. Brad on the other hand was running amok, beating his hairy chest with unbridled disappointment. But how can he expect to win blog awards when he doesn't actually blog any more?
David from NZ and the Three Legged Cat from just up the road in Sheffield had sent their apologies citing transport problems. Ah well! Thank heavens it's all over and done with now. Before everybody left this morning we gathered in the ballroom to say our farewells and sing the bloggers' hymn: "Bloggers of the World Unite". 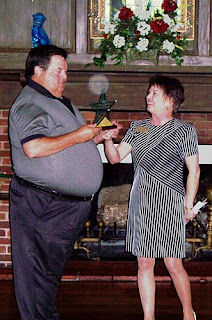