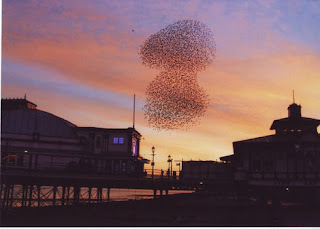 A murmuration of starlings over Eastbourne, Sussex.
I thought this post would be fresh - something new - but I was here before in July 2005, thinking about collective nouns. Perhaps the collective noun for blogposts on the same theme could even be a "revisiting"... So where were we? Ah yes - collective nouns. I sometimes wonder who the hell coined the more outlandish of these terms. It is hard to think that country people of long ago might have looked up into an old wintry sycamore tree and upon spotting a group of crows labelled them a "murder". Somehow these varied and attractive group names have the whiff of nineteenth century wordplay...
"Oh I say Percival! It's raining like billyo outside! Let us retire to the drawing room and dream up some collective nouns for our feathered friends. Then we'll post them to my old college in Oxford!"
"Oh jolly dee Godfrey! What a wheeze! Haw! Haw! What about.... a murder of crows?"
"Spiffing Percy! Absolutely spiffing!"

Some collective nouns for mammals:-
A pod of dolphins
A skulk of foxes
A surfeit of skunks
A huddle of walruses
A coalition of cheetahs
An array of hedgehogs
An aurora of polar bears

Snakes...
A quiver of cobras
A rhumba of rattlesnakes

And back to the birds...
A charm of finches
An exaltation of larks
A pitying of turtle doves
A murmuration of starlings
A descent of woodpeckers
A mustering of storks
A bazaar of guillemots
A parliament of owls
A host of sparrows

Don't you think they are brilliant? Now, in the quest for interactivity dear readers, I am going to ask you to suggest new collective nouns for:-
a) Young people working in a call centre.
b) A group of bankers laid off because of the credit crunch.
c) Air travellers queueing in the departure lounge at Heathrow Airport.
d) Prostitutes standing on a street corner.
e) Pub goers standing outside to smoke their cigarettes.
- December 09, 2008