The Green Man - A mythical winter visitor long before the invention of Father Christmas. 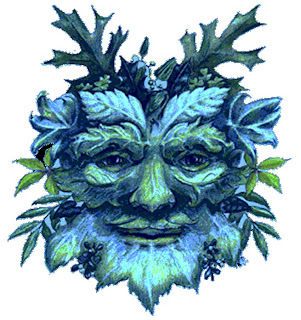 Yesterday was the shortest day of the year in the northern hemisphere. In electrically lit homes with central heating and televisual entertainment, in our pulsing veins we no longer feel the ancient significance of the winter solstice as we return from the supermarket - our cars laden with the pillaged bounty of the earth.
For thousands of years, even from neolithic times, the winter solstice was a special moment in the annual cycle of time. This is reflected in the very archaeology of Stonehenge in Wiltshire and of New Grange in Ireland. A big part of life was about planning to get through each winter. You stored or preserved food. Cattle were killed to avoid having to feed them and thus at ancient festivals around the time of the solstice, there was often more fresh meat available than at any other time of the year.
Evergreen plants bedecked the primitive hovels and Yule logs became centrepieces in community-based rituals - dancing and singing in defiance of the coming trials and tribulations of deepest winter or perhaps appealing to pagan gods. Starvation was common in a world where there was no fall-back, no safety net. Only by binding together with your extended family and neighbours could you hope to make it through to the spring.
Today the sun is beginning its slow ascent into the northern sky and our days will gradually become longer but there is still so far to go to the vernal equinox on March 21st.
Many of England's oldest chuch sites were selected simply because those places were held dear by our pagan ancestors. Architects of Christianity believed they could plug in to the fundamental powers and beliefs of that mysterious ancestry. But like the supermarkets and the flickering images on our plasma screens, Christianity was only a thin veneer, disguising basic truths such as the rising of the sun, our essential relationship with nature and the cyclical nature of time.
Here endeth the Yorkshire Pudding Xmas Lecture 2008. Please put a charitable donation in the box as you leave - yes, that's right... in the box marked "Pudding Holiday Fund". Now I'm off to find me a Yule log! 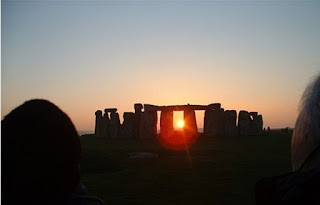